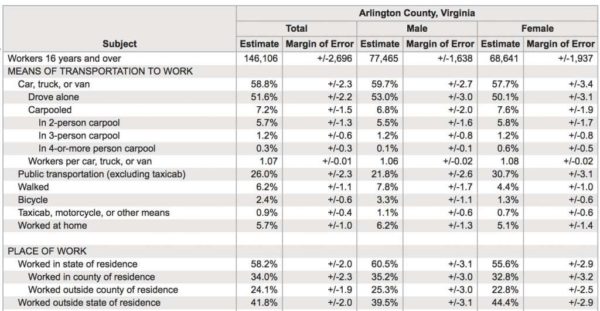 (Updated at 10:45 a.m.) The number of Arlington residents commuting via bicycle is on the rise, according to the Census Bureau’s annual American Community Survey, contrary to the national trend.

The survey showed that in 2016, 2.4 percent of Arlington commuters cycled to work, up from 1.9 percent in 2015. That number is an average of men and women, but slightly more men commute by bicycle. “We think it’s great, of course, and part of a longer trend,” said BikeArlington program director Henry Dunbar. “The bike mode share has tripled since 2009 (0.8 percent), and will keep climbing as Arlington continues to improve its bike infrastructure and more people learn that biking is often the quickest and cheapest way to get around.”

The survey offered data but no possible causation for the numbers. However, a number of factors likely contribute to the nationwide bike commuting slump, including low gas prices and more people working from home. Arlington, however, has been designated a Silver Level Bicycle Friendly Community by the League of American Bicyclists, due in part to its bike-friendly infrastructure and the volume of cyclists.

Other data revealed by the latest census figures include: