Two breweries are newly available, one at Dominion Wine & Beer and one at its sister store Downtown Crown Wine & Beer in Gaithersburg. The former is welcoming Athens, Ohio’s Jackie O’s Brewery, while the latter is offering several bombers from Brooklyn-based, Sterling-brewing Grimm Artisanal Ales.

In the small college town that is best known as home to Ohio University sits a brewpub that began life in 1995 as O’Hooleys, but became the famed Jackie O’s in 2005. Art Oestrike bought the brewpub and began a new era of brewing in Athens, naming it after it his mother Jackie. The name was to be a sort of memorial as she was diagnosed with terminal lung cancer around the same time.

In 2013, Jackie O’s purchased a former cheese factory building and opened their 8,000 barrel production brewery. They have already distinguished themselves from their peers as they have four beers currently on Beer Advocate’s Top Rated Beers list, all of them dark, rich beers.

While their stouts have made that list, they are also known for IPAs and sours. As Jackie O’s production capability expands, so does their distribution. The modest, but superlative Midwest brewery began distributing from coast to coast. Their beers, which are kegged, canned and bottled, are currently available at Dominion Wine & Beer. 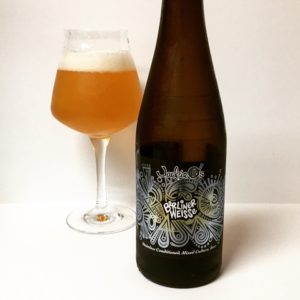 “No kettles were soured in the making of this beer.” So goes the claim on the 16.9 oz bottle. Jackie O’s ages their cultured beers in the solera method, which usually involves moving beers from one vessel to another as the liquid ages.

The Berliner Weisse ages for three months before being packaged and distributed. Pouring a light amber, this sour wheat beer gave off aromas of bitter citrus — lemons and oranges — with a faint hint of acetone. Given the fact that Jackie O’s avoids the typical lemony tang of kettle-soured beers, this is a complex tasting beer. Sour plum and green apple combine to bring the tartness while the malt adds a slight sweetness, which lingers on the tongue. Refreshing and refined, this sour deserves a good look, especially in these summery Fall days that feel warmer than October should.

Laura and Joe Grimm decided to take the leap from home brewing to make it a profession as a so-called nomadic brewery in 2013. Rather than owning a physical brewery, Grimm brews their beers at the Sterling contract brewery Beltway Brewing.

Inspired by trips to Europe with his band, Joe Grimm began experimenting with home brewing and making Belgian-style beers. Brewing for friends led to brewing for gigs where Joe was playing and then to making a living out brewing. Though there’s talk of a brick and mortar brewery for Grimm, they’re still nomads. Like many breweries, Grimm’s brews are limited and even potentially one-time only.

Each beer may be unique, but that isn’t stopping the accolades from coming in. In 2014, Grimm won silver at the Great American Beer Festival for their Imperial stout, Double Negative. Currently, their double IPA, Afterimage, is ranked on Beer Advocate’s Top Rated Beers list. Now, Grimm Artisanal Ales are available at Downtown Crown Wine & Beer in Gaithersburg. 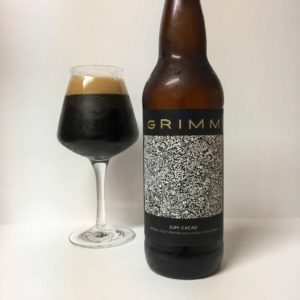 Look at that ABV! This is a big beer. Nay. It’s a huge beer. Brewed with cacao and vanilla, this black beer reminded me of tall, iced Thai coffee. From the creamy head that blends suddenly into opaque darkness, it certainly has the look.

It also has the flavor. While it smells of vanilla, coffee and hazelnut, Sumi Cacao tastes sweet with a pleasantly bitter char. It’s sugary without being cloying. This is totally sharable, though you’ll want to keep it all to yourself. Get this while you can — it might not have won a silver medal, but it still tastes like a champ.