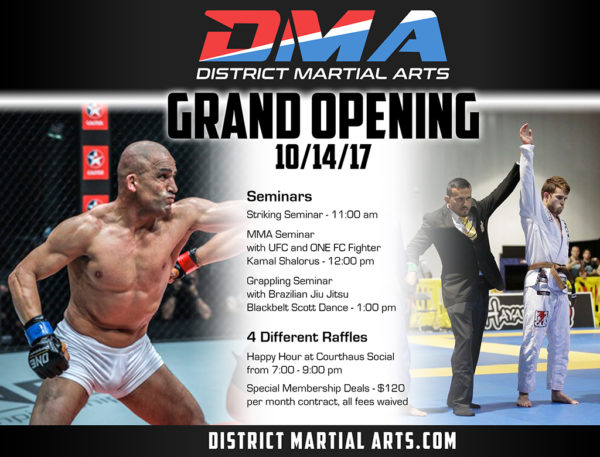 A gym on N. Pershing Drive owned by a former UFC fighter will celebrate its grand opening on Saturday (October 14).

Kamal “The Prince of Persia” Shalorus, who now fights in the Singapore-based ONE Fighting Championship mixed martial arts competition, opened District Martial Arts at 2300 N. Pershing Drive, across from The Shops at Pershing strip mall in Lyon Park.

On Saturday, the gym will host three seminars for its grand opening: on striking at 11 a.m., on MMA at noon and on grappling at 1 p.m. It will then host a happy hour at Courthaus Social (2300 Clarendon Blvd), with four raffles.

Attendees can also sign up for special membership deals at the event, with all fees waived on a $120 a month membership contract.

Shalorus is also one of six instructors at the gym, which offers training in Brazilian Jiu Jitsu, Muay Thai and wrestling.

Former UFC and current OneFC fighter, Kamal “The Prince of Persia” Shalorus, has opened a gym on Pershing Drive.  Classes at the new gym are expanding and include Brazilian jiu-jitsu, MMA, Muay Thai, boxing, wrestling, and Krav Maga.  The gym is a safe and friendly environment for people of any skill level, from complete novice to professional fighter.  Lose weight, learn to defend yourself, stay in shape, and meet some great people.  Instructors include: Kamal;  Scott Dance, a black belt in Brazilian jiu-jitsu; Sam Shawa, a high-level brown belt in Brazilian jiu-jitsu; Mark Cirello, a former Division I wrestler; Charles DiGisco, an amateur MMA fighter and color commentator on UFC fight pass; and Richard Dittler, a Royal Australian Navy veteran who was certified in Krav Maga by KMG founder Eyal Yanilov.

A grand opening with 3 free seminars will be open to the public on 10/14.  Striking seminar will start at 11am, followed by an MMA seminar with Kamal Shalorus at noon, and a Brazilian jiu-jitsu seminar at 1pm with black belt Scott Dance.  Email [email protected] with any questions!