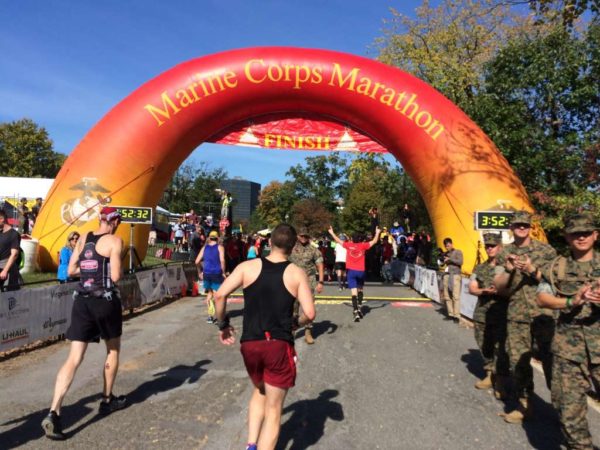 Two Arlington Men Finish in MCM Top 3 — Arlington residents Desta Morkama and Kieran O’Connor finished first and third, respectively, in the 42nd Marine Corps Marathon yesterday. Al Richmond, the last remaining “Groundpounder” who has run every MCM since it started, kept his streak alive with a 6:48.35 finish. The race, which begins and ends in Arlington, had its start delayed by 10 minutes due to a suspicious package investigation. [RunWashington, Washington Post, NBC Washington]

No Major Incidents at MCM — Other than the short starting delay, no major incidents were reported at this year’s Marine Corps Marathon. Within the county, Arlington law enforcement and the fire department maintained a heavy presence along the course, along with Virginia State Police and other agencies. Arlington school buses were parked at key intersections to prevent anyone from driving onto the course. [Twitter, Facebook, Twitter]

Pedestrian Killed on Memorial Bridge — The Arlington Memorial Bridge was closed for more than three hours Saturday morning after a 47-year-old man was struck and killed by a car on the bridge. The driver remained on scene. Police are seeking additional information about the crash from witnesses. [NBC Washington]

Board Approves Library Renovation Project — Arlington Central Library will be getting $1.7 million in renovations, thanks in large part to a private donation. The Arlington County Board approved the project at its Saturday meeting. Per a press release, the plans include “new meeting rooms, an updated ‘tech-central’ area and a multi-purpose maker lab, a community-based space where people can share knowledge and tools to create together.” [Arlington County]

Roosevelt Memorial Anniversary Event — The National Park Service is holding a family-friendly event on Sunday, Oct. 29 to celebrate the 50th anniversary of the dedication of the Theodore Roosevelt Memorial on Roosevelt Island. The event will feature food including fried chicken and Indian pudding; an address from the former president’s great-grandson, Tweed Roosevelt; a Teddy Roosevelt re-enactor; and a “Teddy Bear story time.” Shuttles will be available from the Pentagon parking lot. [InsideNova]