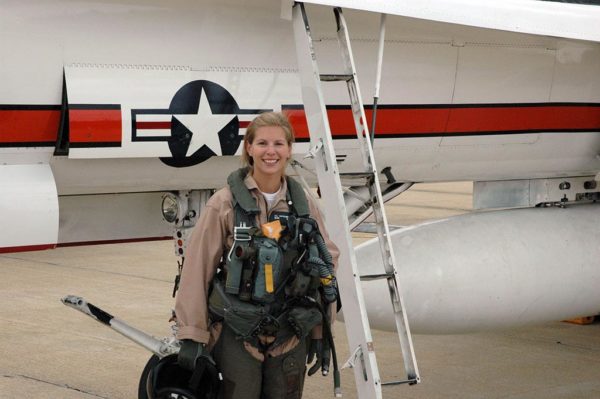 The following letter was written by Pat and Doreen Cappelaere, residents of Ellicott City, Md., regarding an event at Arlington National Cemetery this coming Saturday afternoon.

Our daughter, Valerie Cappelaere Delaney, achieved her dream of becoming a U.S. Navy fighter pilot and earned her Wings for Gold in February 2012.

Just a year later, at age 26, Valerie’s life was cut short when the EA-6B Prowler jet she was piloting crashed in a field near Spokane, Wash., during one of her last training flights prior to deployment. We were devastated, but soon realized that Valerie’s wings and her legacy would take flight in ways we could have never imagined.

At Valerie’s funeral, over 200 female military aviator wings from around the world were presented to our family in honor of her service and sacrifice, and in celebration of the strength and sisterhood of female aviators.

This impressive collection is now on display as part of the Wings for Val Exhibit at the Women’s Memorial at Arlington National Cemetery and became the inspiration for us to start the Wings for Val Foundation. The Foundation’s mission is to support and promote women in all fields, especially in the military and in aviation, and to inspire future generations of female leaders.

On November 4, we will be hosting a free event at the Women’s Memorial where a very special set of wings will be added to the collection from “Shutsy” Reynolds (see video below), one of approximately 1,000 Women Airforce Service Pilots (WASP) who flew military aircraft during World War II.

The event will also feature guest speaker, Erin Miller, the campaign leader for getting the law passed allowing her grandmother, WASP pilot Elaine Harmon, and other WASP to be buried at Arlington National Cemetery.  We hope that you will consider helping us grow our mission by joining us at our upcoming event. Details can be found at www.wingsforval.org.

END_OF_DOCUMENT_TOKEN_TO_BE_REPLACED

More Stories
Fast-Casual Restaurant The Simple Greek Coming to Colonial VillageTransport Expert: ‘Not Too Soon’ for Arlington to Plan for More Driverless Cars