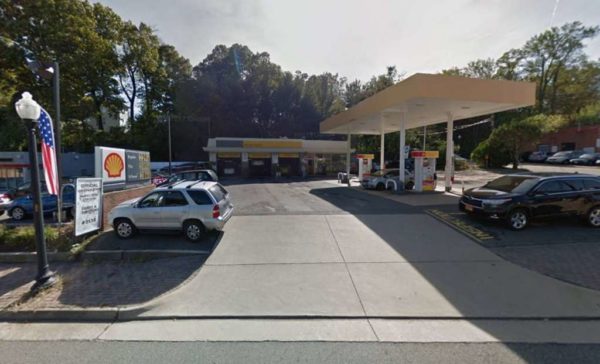 (Updated at 10:20 a.m.) Arlington County Police are investigating an armed robbery that happened Saturday morning at the Shell station in Cherrydale.

Police say a man with a gun demanded cash from the store clerk and fled on foot.

ROBBERY, 2017-11110100, 3300 block of Lee Highway. At approximately 7:13 a.m. on November 11, police were dispatched to the report of a robbery. Upon arrival, it was determined that a male suspect entered a business, brandished a firearm and demanded that an employee give him money. The suspect stole cash, forced the employee outside of the business and fled on foot before departing the area in a vehicle. The suspect is described as a thin, black male, approximately 6’0, wearing dark colored clothing. The vehicle is described as a light tan or cream colored late-model sedan. The investigation is ongoing.

Also from today’s crime reports, ACPD says officers had to use a police dog to peacefully resolve a home break-in.

According to the crime report, a man broke into a home on the 300 block of N. Glebe Road and went to sleep in a bedroom. He refused police commands to leave the home, prompting “the deployment of a police K-9.”

UNLAWFUL ENTRY, 2017-11090246, 300 block of N. Glebe Road. At approximately 5:47 p.m. on November 9, police were dispatched to the report of a suspicious person. Upon arrival, it was determined that the victim arrived at his residence and observed that an unknown male suspect had gained entry to the residence and was sleeping in a bedroom. Arriving officers established a perimeter and made verbal commands but the suspect refused to comply and would not exit the residence. Following the deployment of a police K9, the suspect was taken into custody. Earl Chaptman, 64, was arrested and charged with Unlawful Entry.