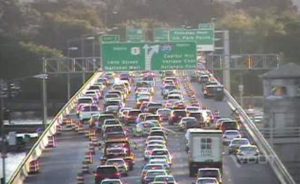 As thousands of drivers around Arlington prepare to hit the roads for the Thanksgiving holiday, the Arlington County Police Department is reminding everyone to always wear a seatbelt.

The department is partnering with the U.S. Department of Transportation’s National Highway Traffic Safety Administration to share the reminder: “Buckle Up — Every Trip. Every Time.”

Every day, unbuckled motorists are losing their lives in motor vehicle crashes. As we approach the winter holiday season, we want to make sure people are doing the one thing that can save them in a crash, buckling up. As part of the national seat belt enforcement campaign, law enforcement agencies around the country will be stepping up enforcement from November 20 to December 1, 2017.

According to NHTSA, during the 2015 Thanksgiving weekend, 301 people were killed in motor vehicle crashes nationwide, and 53 percent were not their wearing seat belts at the time of the fatal crash. Nighttime proved even more deadly, with 57 percent of Thanksgiving weekend crashes occurring at night. That’s why one focus of the campaign is nighttime enforcement. Participating law enforcement agencies will be taking a no-excuses approach to seat belt law enforcement, writing citations day and night.

To learn more about the campaign, visit the NHTSA website.

In a similar effort, Virginia State Police will be be participating in Operation C.A.R.E., the Combined Accident Reduction Effort. Operation C.A.R.E. is a state-sponsored, national program designed to reduce crashes, fatalities and injuries caused by speeding, impaired driving and not wearing seatbelts.

State police will have increased enforcement from tomorrow (Wednesday) through Sunday.

“Tragically, traffic fatalities are on the rise in Virginia,” Colonel W. Steven Flaherty, Virginia State Police Superintendent, said in a statement. “We’ve seen an 11 percent increase over this time last year. With so many people estimated to travel over the Thanksgiving weekend, we need everyone to help prevent crashes by driving smart, buckling up and never driving drunk or drugged. We want everyone to arrive alive and enjoy the holiday.”

And while traffic may be busy along the I-95 corridor, as it has been historically at this time of year, the Virginia Department of Transportation is trying to make life a little easier.

During the Thanksgiving travel period, VDOT will suspend most major highway work zones and lift lane closures on Virginia interstates and major streets from Wednesday through noon on Monday, November 27.

VDOT’s Thanksgiving traffic trends map shows that Tuesday evening and midday Wednesday are among the busiest times on Virginia highways for heading out of the D.C. area.

Thinking of Thanksgiving travel already? Transportation experts now say these are the best/worst times to hit the road – you agree? @nbcwashington pic.twitter.com/gqrVb1AyYm

Similarly, Metro has no scheduled track work on Thanksgiving Day, with trains and buses operating on a Sunday schedule. The system opens at 8 a.m., and will close at 11 p.m. On Friday, November 24, the system will be open on a normal weekday schedule.