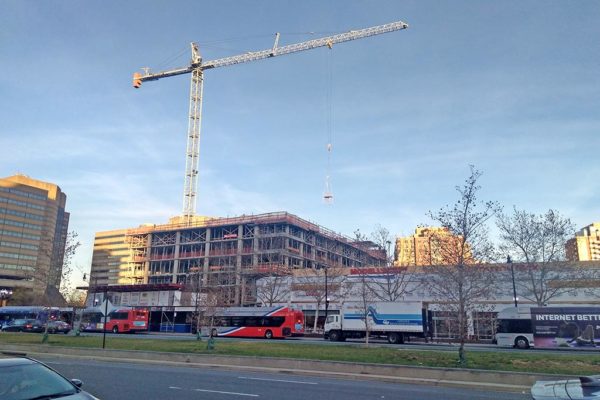 A person’s body was found in the street on the 700 block of 12th Street S., near the Metro station entrance and the Pentagon Centre shopping center and construction site, around 9 p.m. Sunday night, according to ACPD spokeswoman Ashley Savage.

The police department requested the assistance of the Fairfax County Police helicopter in obtaining an aerial view of the scene and investigating how the person died, and the investigation is ongoing as of 4 p.m. Monday, Savage said.

A tipster tells ARLnow.com that they believe the individual fell from the construction crane on the site. A Twitter user reported Sunday night that the helicopter was shining its light on the crane.

Police said on Monday that they could not yet confirm the manner of death.

“This remains an active investigation and next of kin has not yet been notified,” said Savage. “The death is not considered suspicious and there is no threat to the public.”