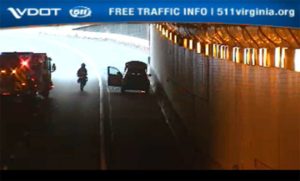 Update at 3:25 p.m. – Police have reopened the left-hand lane of westbound I-66. Traffic is proceeding slowly. Drivers can still expect delays as firefighters leave the scene.

Earlier: A vehicle fire closed the Rosslyn Tunnel on I-66 just after 3 p.m. this afternoon.

According to scanner traffic, a vehicle caught fire in the westbound lanes at mile marker 74.5. Traffic cameras showed the car had pulled over into the right shoulder.

Virginia State Police shut the tunnel to traffic heading west, with firefighters from the Arlington County Fire Department on scene to help put out the flames.

From the traffic cameras, there appeared to be some flames from the car’s underside, but firefighters quickly put out any fire just before 3:20 p.m.

Drivers in the area can expect delays.