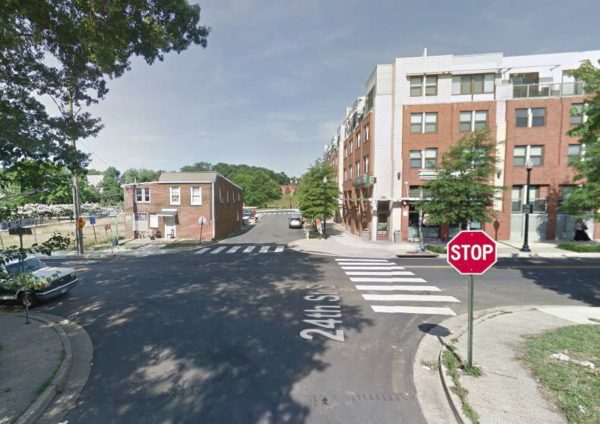 Arlington County Police are still investigating a drive-by shooting in the Nauck neighborhood this past Sunday night.

Three male suspects in a dark van or SUV opened fire on a group of four juvenile near the intersection of 24th Street S. and Shirlington Road around 8:15 p.m., according to police. A resident who lives nearby emailed ARLnow.com and described a chaotic scene.

“Around 8:12 a series of approximately eight gunshots were heard followed by several individuals seen running through the neighborhood,” she said. The resident added later that she’s skeptical that no one in the neighborhood was able to give a better description of the vehicle or the suspects.

Police are treating the shooting as an “attempted malicious wounding” rather than attempted murder. ACPD spokeswoman Ashley Savage said the incident “remains an active and ongoing investigation by the Arlington County Police Department’s Homicide/Robbery Unit.”

“Police have collected crime scene evidence, canvased the area and spoken with witnesses,” Savage said. “The events that preceded the shooting remain under investigation.”

“The Third District Community Policing Team has been in touch with community members since the incident occurred and is attending a tenants meeting in the community next week,” Savage continued. “Anyone who has information regarding this investigation is asked to call Detective Bertollini at703.228.4243 or [email protected]. Information can also be reported anonymously by calling the Arlington County Crime Solvers at 866.411.TIPS (8477).”