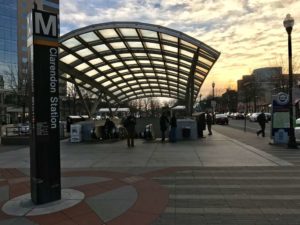 Anyone looking to get online at some of Arlington County’s Metro stations can now do so using free Wi-Fi provided by Metro.

As part of an expansion to 24 more stations, users at Rosslyn, Clarendon, Courthouse, Crystal City will now be able to access the free wireless internet. Free Wi-Fi is now offered at 30 underground Metro stations throughout the system.

Metro said it expects that all other underground Metro stations — which includes the likes of Ballston, Virginia Square and Pentagon City — to have free Wi-Fi by mid-2018.

“We are pleased to offer extended hours on Metrorail during New Year’s Eve as a service to our customers who will be ringing in the New Year,” Metro general manager/CEO Paul Wiedefeld said in a statement. “I also want to thank our employees who will be working to provide the public with a safe and responsible option to get around.”