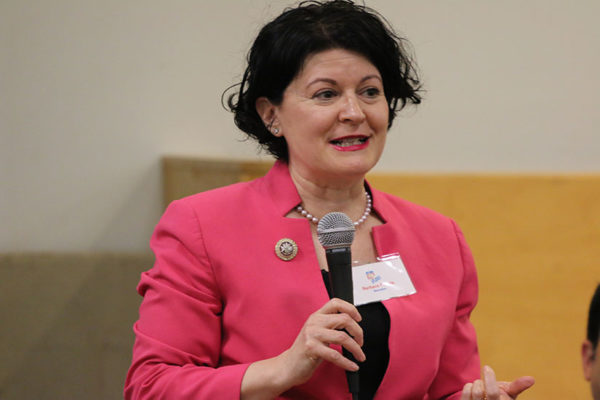 A bill in the Virginia State Senate would require that drivers come to a complete stop when yielding to pedestrians crossing the street.

The bill, SB 46 introduced by state Sen. Barbara Favola (D), adds language to state law telling motorists what constitutes yielding to a pedestrian: “by stopping and remaining stopped until such pedestrian has safely crossed,” per the bill text.

Favola’s bill would require drivers to stop and remain stopped at the following places:

Language on when drivers must yield to pedestrians is included in the Virginia Criminal and Traffic Manual, but does not include the line to have drivers stop.

“Under this bill, a car would have to stop. Right now all you have to do is yield,” Favola told ARLnow.com. “So if a pedestrian is crossing and is on one half of the crosswalk, a car can go through the other half. This would make them stop completely.”

Favola’s district includes sections of Arlington County. The new legislation comes on the heels of a recent enforcement effort by the Arlington County Police Department, during which officers cited more than 30 motorists at several intersections for failing to yield.

The bill would not change the fines for violations: $100-$500 when street signs require drivers to yield and no more than $100 at crossings with shared-use paths like trails.