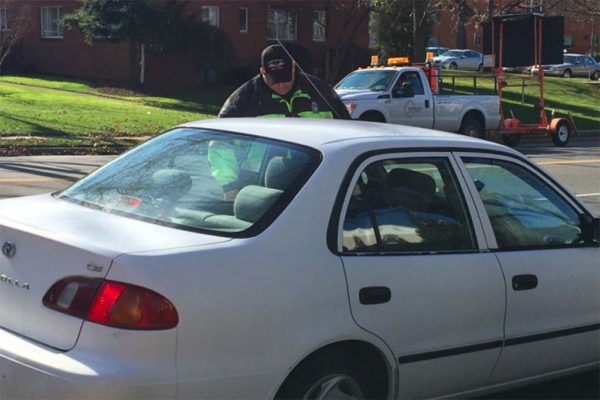 The Arlington County Police Department cited 20 drivers yesterday (Thursday) on Columbia Pike for failing to yield to pedestrians, as part of an active enforcement effort.

Officers stationed themselves at the intersection of Columbia Pike and S. Oakland Street in Alcova Heights and an officer in a bright orange shirt crossed the street as cars in the distance started to approach. ACPD spokeswoman Ashley Savage said they cited 20 people for failing to yield.

The enforcement effort is part of its 2017 Street Smart Pedestrian, Driver, and Bicyclist Safety Campaign. A similar enforcement by police officers took place in mid-November.

The program aims to change road users’ behavior while reducing the number of crashes and injuries. Officers ticketed motorists, bicyclists and pedestrians who violated traffic laws.

It’s a beautiful day to #BeStreetSmart. ACPD conducting high-visibility traffic enforcement at the intersection of S. Oakland and Columbia Pike. Proceed with care and caution for the safety of all travelers. pic.twitter.com/BSiJiGrtcS

The ultimate goal of today’s high-visibility traffic enforcement campaign is compliance with the law, even when police are not present. Slow down and yield to pedestrians in the crosswalk. pic.twitter.com/vZtNz39MUX

Pedestrians, see and be seen by using marked crosswalks whenever possible. Look left, right, and then left again before crossing. More tips at https://t.co/uStSSMlUCG #BeStreetSmart pic.twitter.com/YIqZz5lSvt

Drivers given a safe stopping distance of 170 feet. Our pedestrian waits for a safe break in traffic and never enters crosswalk in disregard to approaching traffic. Those that fail to yield are cited. pic.twitter.com/Wk3EhgGzv6