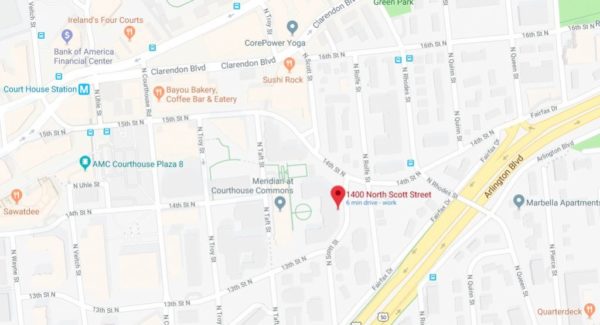 A Maryland man armed with a “piece of metal” allegedly threatened to steal a woman’s car in the Courthouse area last week.

The crime, described as an attempted carjacking, happened just after 4:30 p.m. on Thursday afternoon, according to police.

ATTEMPTED CARJACKING, 2018-01040128, 1400 block of N. Scott Street. At approximately 4:37 p.m. on January 4, police were dispatched to the report of a suspicious person. Upon arrival, it was determined that the male suspect, holding a piece of metal, approached the female victim and allegedly told her he was going to take her vehicle. The victim was able to safely leave the location and contact police. Responding officers canvased the area and located a suspect matching the description provided by the victim. Jeffrey Johnson, 40, of Waldorf, MD was arrested and charged with attempted carjacking. He was held on no bond.

The rest of this past week’s crime report highlights, including some that we’ve already reported, after the jump.

BURGLARY (late), 2018-01080031, 1300 block of N. Rolfe Street. At approximately 6:20 a.m. on January 8, police were dispatched to the late report of a larceny. Upon arrival, it was determined that an unknown suspect(s) forced entry to a construction site and stole items of value. There is no suspect description. The investigation is ongoing.

BRANDISHING, 2018-01050170, 900 block of S. Buchanan Street. At approximately 3:13 p.m. on January 5, police were dispatched to the report of a brandishing. Upon arrival, it was determined that after the victim parked his vehicle, the driver of another vehicle allegedly became irate, threatened the victim and brandished a firearm. The suspect fled the scene prior to police arrival. The victim was uninjured. The suspect is described as a Hispanic male, 23-25 years old, approximately 5’6, with short, wavy, black hair, wearing gray pants and a white shirt. The investigation is ongoing.

ASSAULT ON LAW ENFORCEMENT, 2018-01060186, 1600 block of N. George Mason Drive. At approximately 6:35 p.m. on January 6, officers were at Virginia Hospital Center as part of a separate investigation when an unrelated patient become disorderly and combative in the emergency room. When officers intervened, the patient refused to comply and allegedly struck one officer with a closed fist. The officer was not injured. Stephanie Green, 53, of No Fixed Address, was arrested and charged with Assault on Law Enforcement. She was held on no bond.

ATTEMPTED ARMED ROBBERY, 2018-01040177, 1000 block of S. Hayes Street. At approximately 9:42 p.m. on January 4, police were dispatched to the report of an attempted armed robbery just occurred. Upon arrival, it was determined that two male victims were walking in the area when they were approached by three unknown suspects. One suspect brandished a firearm and attempted to steal money from the victims. The suspects were unsuccessful and fled the area on foot. The suspects are described as three black males, between 16 – 21 years of age, approximately 5’8″ to 6″ tall with average builds. The investigation is ongoing.

NARCOTICS VIOLATION (Significant), 2018-01040111, 2200 block of S. Clark Street. At approximately 3:30 p.m. on January 4, police executed a narcotics search warrant and one suspect was taken into custody. Jacob Hill, 36, of Fairfax, VA was arrested and charged with manufacturing, selling, giving, distributing, or possessing with intent to manufacture, sell, give, or distribute a controlled substance and transporting a controlled substance.

UNLAWFUL ENTRY, 2018-01030269, 600 block of N. Irving Street. At approximately 10:26 p.m. on January 3, police were dispatched to the report of an audible alarm. Upon arrival, it was determined that a known suspect gained entry to a church after hours. Arriving officers conducted a search of the building and located the suspect exiting the church. William Barker, 54, of No Fixed Address, was arrested and charged with Unlawful Entry (x2).

Biz Talk highlights the SelectUSA conference that connects business leaders from around the world.

Arlington County has already vaccinated several hundred children ages 6 months to 5 years, in the first week the jab was offered for that age group. That’s according to a…

A shoplifting suspect led Arlington police on a foot chase in Pentagon City, then allegedly bit an officer before finally being taken into custody. The incident happened Monday afternoon in…

Firefighters battled a two-alarm blaze at a house in the Barcroft neighborhood this morning.