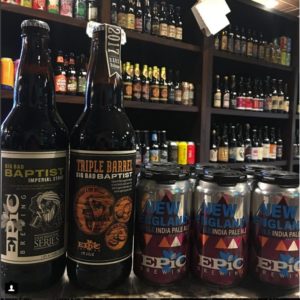 Billing itself as the first brewery in Utah since Prohibition to brew only high alcohol beer, Epic Brewing Company has carved out a niche for itself in both sours and stouts. Founded by David Cole and Peter Erickson, the Salt Lake City brewery began as a way to celebrate the big beers the two had been accustomed to drinking in California and the “epic” adventures that they enjoyed as partners in an aquaculture business. A law change in Utah in 2008 made their postponed dreams possible.

It didn’t take long for Epic to grow. In 2013, Epic opened a brewery and tap room in the River North district of Denver. There they were able to expand their barrel aging and open a proper tap room — Utah law requires that beer stronger that 4% ABV be sold in bottles.

In late 2017, Epic expanded west by striking an investment deal with Santa Barbara’s Telegraph Brewing Company. According to Epic’s press release, the plan is to offer new packaging and, by moving foeders (tanks used for aging sour beers) there, to expand both Epic’s and Telegraph’s sour beer program. Now they distribute to about half the 50 states and Washington, DC. 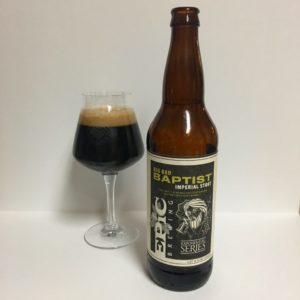 Big Bad Baptist — such a fun, irreverent name — is part of Epic’s Exponential Series, beers that they describe as being for the “accomplished consumer.” Whatever that means to them, what it means to us is that this is part of a series of big beers — really big ones. Big Bad Baptist weighs in at a hefty 11.7% ABV. Brewed with cocoa nibs and coffee and whiskey-barrel aged — a different coffee is used each time — Baptist is a flavored stout, but it’s no novelty.

You can look your bottle up on Epic’s web site to find out where the coffee in your stout came from — mine is a #93, which makes the coffee Blue Copper Coffee. Put your nose up to it and you’ll find some warming vanilla, sweet chocolate syrup, chicory and coffee beans. The sip takes you on a ride starting with dried plums and sharp alcohol up front, iced coffee in the middle and a smooth vanilla sweet finish. I know I refer to the “sip” all the time, but here it’s a must. This is a tricky and strong beer, which must be sipped. It’s a real treat!