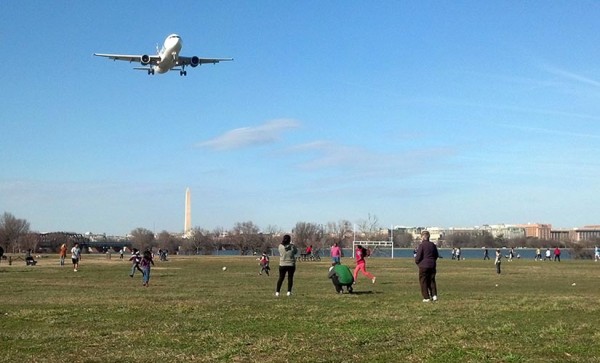 The bill failed once in the House Natural Resources Committee, but then was brought up again and passed 18-16 on a party-line vote.

It now heads to the House floor for debate and a final vote, with similar actions required by the U.S. Senate before it can be signed into law by President Donald Trump.

But Beyer, a committee member whose district includes Arlington County, took exception to the efforts to rename the park near Reagan National Airport’s main runway as Nancy Reagan Memorial Park. The bill, H.R. 553, is sponsored by Rep. Jody Hice (R-Ga.) and has 51 Republican co-sponsors.

In remarks to the committee today (Wednesday), Beyer criticized the bill for not taking sufficient public input from residents of Arlington and Alexandria, the communities closest to Gravelly Point.

“[This] bill is the equivalent of someone coming in and changing the furniture in your house without asking you,” he said. “First, you would have liked them to ask you, and even if you do like the furniture, you probably would have wanted input since it’s your house…Gravelly Point is not a national tourist attraction, it’s where local families go to have a picnic, throw a ball around, put a blanket down and watch the planes coming in and out, and it’s also where almost every Northern Virginia Uber driver sits to wait for a pickup.”

“This is what some call Washington at its worst — when we ignore the will of the local community to appease the desire of a moneyed, special interest,” Beyer said.

In response, Hice said there was “no better way” to honor Reagan by naming the park after her.

Beyer’s full remarks on the bill, including a video clip, are after the jump.

“Mr. Chairman, with true regret I rise to speak in opposition to this bill.

I have great respect for Nancy Reagan, and my opposition to this bill must not be interpreted as my having any personal animus towards our former First Lady.

But this bill is the equivalent of someone coming in and changing the furniture in your house without asking you. First, you would have liked them to ask you, and even if you do like the furniture, you probably would have wanted input since it’s your house.

First and foremost, this bill does not have local support and did not have any local input.

Gravelly Point is not a national tourist attraction, it’s where local families go to have a picnic, throw a ball around, put a blanket down and watch the planes coming in and out, and it’s also where almost every Northern Virginia Uber driver sits to wait for a pickup.

In this committee I constantly hear from my Republican friends that local communities know how to manage their land better, and that the feds should stay out of local decisions. I hope that this doesn’t only apply to Republican districts. This bill is Congress unilaterally forcing a decision on a local community — Arlington and Alexandria — without any local say or input.

And why? Because this bill is the pet project of Americans for Tax Reform, a special interest group. This is what some call Washington at its worst — when we ignore the will of the local community to appease the desire of a moneyed, special interest.

While I understand the desire to honor political figures, something like this should not be done without involving the local community. This would be the equivalent of my offering a bill in Mr. Hice’s district to rename the Oconee National Forest’s campground the Hillary Clinton campground or the Michelle Obama campground. I’m sure Mr. Hice would like his constituents to be able to weigh in on a decision like that.

The other reason this is concerning is the process with which it was handled. My understanding typically is that when offering legislation that impacts another Member’s district you either work with them or at least notify them. That respect was not extended to my office.

When we discovered it was Americans for Tax Reform and not our constituents that wanted the bill, we asked the sponsor’s office to not move forward, and my requests via staff were ignored. I was deeply surprised to find this bill before us here in markup. I asked the committee if they would remove it from markup, but that request was also denied.

This also [gets to] the process of how we consider bills. This bill had no legislative hearing. This is the first time that I have an opportunity to formally speak expressing my concerns.

And the other reason we needed a legislative hearing is because there is a potential technical impediment to the bill that needs airing.

Memorials, monuments and other commemorative works in Washington DC and its environs are governed by the Commemorative Works Act, which lays out a series of guidelines for the establishment of memorials and requires consultation with the National Capital Memorial Advisory Commission. The Commission reviewed H.R. 5457 – the identical bill [introduced] in the 114th Congress – and determined that the proposal to establish Nancy Reagan Memorial Park potentially violates several guidelines established by the CWA.

First, Congressional authorization for memorials to individuals is not supposed to occur until the 25th anniversary of the death of the individual. Since space is limited and memorials should not be established without careful consideration, this provides time for reflection on the individual’s contributions. Since Mrs. Reagan passed away less than three years ago, the designation of a memorial park in her name violates the CWA.

Second, the CWA requires a comprehensive evaluation of site locations to determine suitability. The commission noted that this hasn’t happened for this proposal and that the designation of this site after the Former First Lady could prevent the establishment of other memorials in the area, since CWA states that no new memorial shall encroach upon an existing memorial.

So as one of my constituents wrote on ARLNow.com, I ask my colleagues to “just say no.” We cannot allow a pet project of a special interest group to override local consideration or input. Just as I respect my colleagues to know what’s best in their districts, I’d ask the same curtesy be extended. Let’s allow for public comment and local input and follow the Congressionally mandated process.

Mr. Chairman, I yield back.”

“I would humbly suggest that if we want to rename the park from Gravelly Point, that we engage the Arlington County Board, the Alexandria City Council, the jurisdictions that are there with all the constituents that are using this on a regular basis, and rename it after a vigorous public discussion about which of our many former First Ladies or just American leaders who should be honored in that way, rather than just unilaterally deciding that former First Lady Reagan – whom I admire very much – that this park should be named after her.”