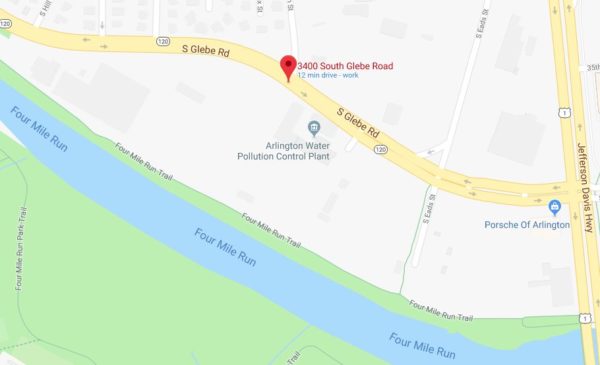 Update at 11:55 a.m. — Three suspects, all teens, have been arrested and charged in the stabbing. Police say the incident was gang-related.

At approximately 4:50 p.m. on January 22, police were dispatched to the 3400 block of S. Glebe Road for the report of a stabbing. Arriving officers located one male victim suffering from multiple stab wounds and immediately began performing life saving measures. The victim was transported by Alexandria Fire Medics to George Washington University Hospital with serious but non-life threatening injuries.

The investigation determined that the male victim was walking on the trail when he was approached by the suspects. Following a verbal altercation, the suspects assaulted the victim before fleeing the area. Arriving officers established a perimeter and located three suspects matching the descriptions provided by witnesses.

The investigation into this incident is ongoing. Anyone with information about this investigation is asked to contact Detective Henretty of the Arlington County Police Department’s Gang Unit at 703-228-4110 or [email protected] Information may also be provided anonymously through the Arlington County Crime Solvers hotline at 1-866-411-TIPS (8477).

The stabbing happened around 4:50 p.m., along the trail near the county’s water treatment plant. Police say a man was stabbed after some sort of altercation with a group of suspects.

Other trail users came to the victim’s aid. He was transported to the trauma center at George Washington University Hospital and is expected to survive.

An ACPD spokeswoman said the investigation is “ongoing” and that police talked to witnesses at the scene, but thus far no arrests have been made. As of Monday evening there was no description of any of the suspects nor any word of a motive for the crime.

UPDATE: Victim’s condition has been updated and is considered non-life threatening. The investigation is ongoing.

No charges have been filed at this time. The investigation is ongoing and we ask that anyone with information related to the incident contact police at 703-558-2222.