Last week was a fun one for Dominion Wine & Beer and their sister store, Downtown Crown Wine & Beer. First, Dominion collaborated with Herndon-based Aslin Beer Company to brew Haka, a double IPA (DIPA) using exclusively Nelson Sauvin hops that released on January 20. On Saturday, January 27, Dominion will tap their final two kegs of Haka starting at 10 am — Aslin has already sold out of their stock.

Also, on January 20, Cambridge, MD-based RAR Brewing sent out modified ice cream trucks to deliver three flavors of limited beers to Max’s Taphouse in Baltimore, Brookand Pint in the District and Downtown Crown Wine & Beer in Gaithersburg. The guys at Dominion and Downtown Crown captured the festivities on video. I’ve got some thoughts on the beers below. 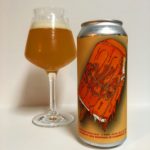 The first and lightest of the confectionary beers that RAR trucked to Downtown Crown happens to also be the one that I couldn’t get enough of. All the flavors were fun, no doubt, but this one tapped into nostalgia.

What’s funny is that I never even liked creamsicles with their sweet fake orange coating and blandly creamy “vanilla” centers. But RAR has put together a beer that both evokes the specific experience of eating a creamsicle and transcends it.

Promisingly, I found aromas of sweet cream, tangerine and a hint of lemon rind. The sip begins sweet — orange cream soda — only to have the sweet vanilla cream flavor intensify next. A light and welcomed bitterness settles in in the finish. That bitterness is exactly what sets this beer apart from the everyday creamsicle. What a way to make a Winter day feel like Summer! 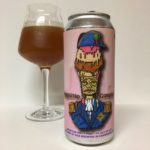 Neapolitan Complex may not have been my favorite, but it did not disappoint — besides it has one of the best beer names I’ve heard in a while. It makes me smile every time I read it.

Really, though, this was a tasty and oddly accurate beer. Sweet and thick, Neapolitan — a name that immediately indicates the flavors you should expect — delivers with a combo that begins with a Yoohoo-like chocolate and finishes with a distinct strawberry tang. Where Pulpsicle was sweet, but still retained some bitterness, Neapolitan and Ice Cream Seas are completely dessert beers. 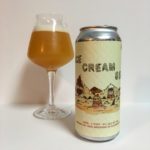 Ice Cream Seas gives away nothing by either its name or its artwork. What is an ice cream sea? It sounds awesome.

Is it salty? I hope not. Great news. It’s not salty and it tastes like you’d hope a sea of ice cream would taste. There’s a little citrus, a little herb and a sweet cream like homemade divinity swirling in every sip. Despite its 8% ABV, Ice Cream Seas remains smooth without any overt alcohol astringency or burn. This adult milkshake is on point. 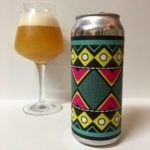 I had the pleasure of writing about Aslin Beer Company for Dominion back in 2016 when Aslin was only 8 months old and Dominion was about to begin serving their beer. By now, Aslin has grown beyond its original location, and Dominion has embarked on multiple collaboration brews with area breweries.

Dominion’s latest collaboration yielded a NEIPA that, true to Aslin’s reputation, is delicious and bold. Made with the popular exotic hop from New Zealand, Nelson Sauvin, Haka is a singular experience.

Aromas of musk melon, Valencia orange and grape skin precede the juicy sip that’s full of white grape and ruby red grapefruit. Thoroughly smooth on the tongue, Haka is fruity and light without much sweetness and a bitter finish. It’s a shame this isn’t a larger run beer, I’d stock my beer fridge with this one.

Don’t wait until Saturday to come down to Dominion Wine & Beer because on Friday, January 26 they’ll have their weekly beer tasting featuring beers from Ocelot Brewing Company, Omnipollo and Weihenstephan USA from 5-7 p.m. Cheers!