In 2013, Jake Endres and Lee Rogan took to popular crowdfunding site Kickstarter to raise capital to start their brewery.

Both brewers had been home brewing for several years, and agreed that the time was right open their dream brewery. Starting as a “nanobrewery” — a brewery that only brewed in small batches — out of their downtown Leesburg location, Crooked Run first brewed a classic English pale ale and a Belgian ale. They even held the distinction of being the youngest brewery owners for a time.

In 2017, Crooked Run expanded to nearby Sterling, opening a 10 barrel brewhouse, a tap room and even a taqueria — a joint venture with Leesburg’s Señor Ramon’s Taqueria.

In addition to adding space and brewing capacity, they’ve added a coolship — a special vessel for fermenting beers that is open — for sours and spontaneously fermented beers. They have been producing beers using the coolship for nearly a year and are looking forward to releasing some mixed-fermentation sours this summer. Also coming soon are some strong, barrel-aged beers.

Whether through awards or by word of mouth, they are having success. With the opening of the Sterling brewery, Crooked Run began canning their most popular beers. Now available at local bottle shops, like Dominion Wine & Beer, the cans come in four packs. They aim to increase the production of their canned offerings based on the response.

I’m going to look at three of their cans. 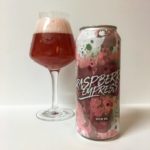 The first thing you have to do when drinking one of these is take in that guava pink color. Then go ahead and inhale deeply — you’ll find an aroma of berries and pinot Grigio with a distinct earthiness.

Sour IPAs can be exciting beers. For one thing, they tend to be slightly less tart than most sours. And, it’s interesting to taste how the hops interact with the sourness.

In this case, the beginning of the sip is distinctly fruity and tart. Midway, that fruit is offset by a bitter herbal flavor right before finishing with a biscuity malt. This is a tasty and flavorful sour that would be a welcomed beverage on a hot summer day. 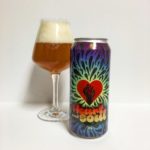 As “flagship” IPAs go, you probably won’t find many more that are as delicious as Heart and Soul. It’s on the light side, which suits me fine. As good as this IPA is, who wants to stop at just one?

Putting my nose up to the glass, I got a heady mix of mango and currant with a hint of a sweeter citrus and bread crumbs. The sip starts with slightly spicy herbs up front finishing with a fruity tang. A light bitterness remains on the tongue after you swallow. Mingling throughout the sip is a light maltiness.

This is a solid, fruity IPA that still remembers that it is descended from pale ales. According to the brewery’s blog, Heart and Soul is so popular that they are exploring an option to contract brew it. They just can’t keep the 4-packs on the shelves. 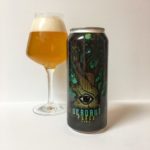 Whoa, that tree has an eye in it! Despite being billed as a hazy, juicy IPA — perhaps it is on draught — my can was a strong, sweet double IPA.

Earth and pine show up both in the aroma and in the flavor, keeping Verdant Force true to its name. I was a bit taken aback at first by the sweetness, but as it warmed a bit, the sugar seemed to blend in better with the slightly bitter pine. There’s no mistaking this big DIPA for a chuggable beer, sip it and enjoy the blend of Citra and Simcoe hops.