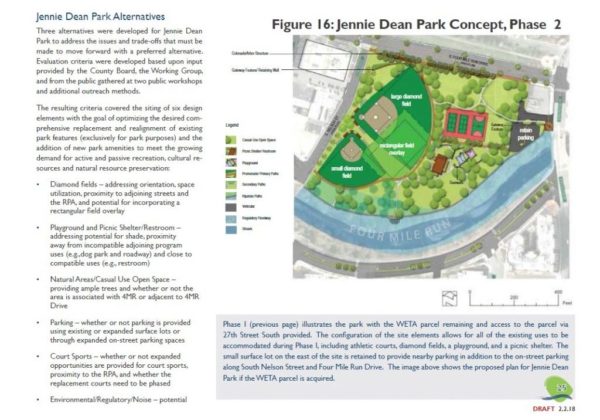 The following Letter to the Editor was submitted by long-time Nauck resident Portia Clark, the current president of the Nauck Civic Association.

My family has lived in Arlington for more than a century. I was raised in Arlington, and my children and grandchildren live here too. Some of my ancestors from the 1800’s are buried in the cemetery next to Lomax A.M.E. Zion Church, which was established in 1866. Lomax falls within the Four Mile Run Valley Study Area.

When I was young, I went to Arlington public schools. Yet, my mother growing up in Nauck, was not allowed to play in most Arlington County parks because of the color of her skin.

The the only park open to her and her siblings was Jennie Dean Park. Arlington County’s then- Department of Recreation noted in its 1949 report that Jennie Dean Park was the county’s “sole recreation area for colored citizens.” In the Park’s historical markers, there are photos of my family members, friends and neighbors.

The Nauck community hasn’t asked for much with regard to Jennie Dean Park, other than to revitalize it and to minimize the impacts on our community. We certainly have ideas for what amenities we would like to see in the Park, but we understand – maybe better than anyone else – that parks should be for the entire community. So, when the County told us that they wanted the same amenities to stay in the park – no more, no less – we understood that everything we discussed at numerous meetings could not go into the park.

We did insist, however, that respect be paid to the Nauck community. This means that the front of Jennie Dean Park, the portion fronting the neighborhood at Four Mile Run Drive, be left open for casual use. We want this area to be a gateway for the community to enter the Park. We want it to be green. We want it to be landscaped. We want it to have flowers and trees and open space.

Instead, the County has drafted plans to place a baseball field in that spot, instead of another part of the Park. A baseball field, especially one with fencing and stadium lights, is not welcoming. The County’s draft plan also hides a playground and shelter area away from the community it would serve. This County plan offers no connection to the neighborhood and its cultural heritage, except for a historical marker with some friendly faces on it. This plan will negatively impact our community in a number of ways.

It doesn’t have to be this way. In fact, the County drew up plans, which it insisted were viable, that accepts the placement we requested and the honor we deserve.

The Nauck Civic Association has already voted – unanimously – that this draft plan from the County on Jennie Dean Park is a non-starter. We hope others will join us in expressing this concern.