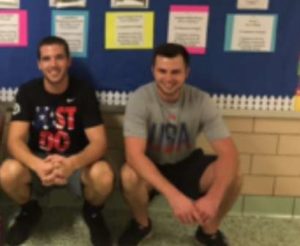 (Updated at 4:45 p.m.) A suspended Taylor Elementary gym teacher, accused of smoking pot in the school, has pleaded guilty to marijuana possession.

“It’s typical for a first time possession of marijuana case to result in a deferred disposition,” Stamos said. “My office, however, argued against such an outcome given the particular facts of this case. Those facts include what appears to have been a rather steady course of use, at times at the school, that we learned about from an anonymous tip to ACPD.”

A second Taylor P.E. teacher nabbed by police, Michael Diaddigo, was also facing possession of marijuana charges, which have since been dropped. Stamos, however, said charges against Diaddigo are expected to be filed soon in Arlington County Circuit Court, which typically handles more serious criminal cases. Stamos declined to elaborate on the charges, since the case is pending.

Lloyd and Diaddigo were both suspended without pay by Arlington Public Schools “pending the outcome of the legal case,” a spokesman said. So far, there is no word on Lloyd’s employment status following the plea. A third Taylor P.E. teacher who was accused of smoking marijuana at the school is currently on administrative leave.