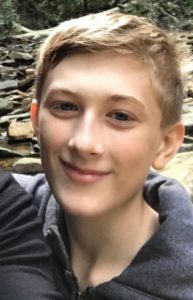 Update at 9:45 p.m. — The missing teen has been located safely, according to police.

Earlier: The Arlington County Police Department is asking for the public’s help in locating a missing teen.

Police say the boy, 14, went missing this afternoon from the Bellevue Forest neighborhood and is considered endangered. He was last seen around 3:30 p.m.

He is described by police as “a white male with short blonde hair and blue eyes,” about 5’4″ and 110 lbs.

“He was last seen wearing black and yellow patterned pants and a black and blue hoodie,” police said in a press release. “He was reported to not be wearing shoes at the time he left his residence. [The boy] is considered endangered and may be in need of medical services.”

Anyone with information about the teen’s whereabouts is asked to call ACPD’s non-emergency number: 703-558-2222.