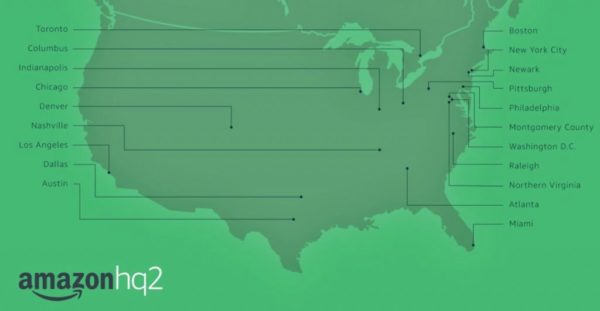 Hype has been building over Amazon eying Arlington as a potential destination for its second headquarters, but many may be unaware that the online giant already has offices in the county.

The D.C. region already has a number of Amazon offices and facilities, including a 50,000 square foot office at 4250 N. Fairfax Drive in Ballston.

Amazon did not respond to requests for more information about the office, but job listings for the Ballston office include titles like “Event Marketing Manager,” “Partner Development Representative” and “Business Development, DoD.”

Other property leased or owned by Amazon in the region includes a small D.C. headquarters a block away from Union Station and a planned two million square foot data center, reportedly either in Virginia’s Loudon or Prince William counties.

Amazon Web Services is believed to operate at least nine data centers in Sterling and nine in Ashburn (with two more under construction) as well seven in Manassas. The company also has two data facilities in Chantilly, and one in Haymarket in Prince William County.

The Washington metro region as a whole is gunning for the $685 billion dollar company, but few details have emerged regarding the incentive packages that local governments have crafted to lure Amazon to their jurisdictions.

Arlington County Board Chairman Katie Cristol promised eventual transparency on Arlington’s incentive package in January at a “Meet the Chair” event, according to the Sun Gazette.

Crystal City (in combination with Potomac Yard) is considered strong contender for the Amazon’s new second headquarters, primarily due to the large expanse of undeveloped land, contiguous office space and proximity to Reagan National Airport, D.C. and the Blue and Yellow Metro lines. Rosslyn is also in contention for “HQ2,” as are sites in Alexandria, Fairfax and Loudoun counties, Montgomery County, Md. and the District.