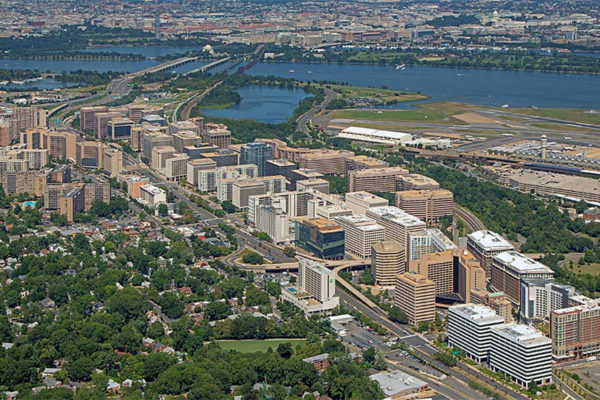 Arlington County and seemingly every other place in North America is competing to host Amazon’s second corporate headquarters. But while the odds seem long, Crystal City actually has a good shot at being one of the finalists in Amazon’s search.

The D.C. area is widely regarded as a likely contender for “HQ2,” but sources tell ARLnow.com that the District itself is unlikely to get the headquarters, in part due to high taxes, high real estate costs, a lack of available contiguous space that meets Amazon’s expectations and a lack of congressional representation.

That would leave the areas surrounding D.C. as contenders, and none has the available space and is more accessible to downtown, transit and an airport than Crystal City.

Specifically, commercial real estate sources tell us, Crystal City and Potomac Yard are, in combination, regarded by many as the region’s best chance at landing HQ2. Among the advantages:

As outlined by Washingtonian, Crystal City also comes with all of the benefits of the D.C. region: ample tech talent and universities nearby, proximity to the federal government, and an easy drive for Amazon CEO Jeff Bezos from his new Kalorama mansion. It also comes with some of the negatives: higher real estate costs than smaller cities, high cost of living for workers and thus higher salary costs.

Fresh off of its big win in attracting Nestle’s U.S. headquarters, Rosslyn has also tossed its hat into the HQ2 ring, sources tell us. Rosslyn has many of Crystal City’s pluses but, we’re told, lacks developable space and would be tight quarters for the online giant.

Sites in Fairfax and Loudoun counties — near existing Amazon data centers and offices — have been pitched, but sources expect a site closer to the District to be more attractive to Amazon for HQ2.