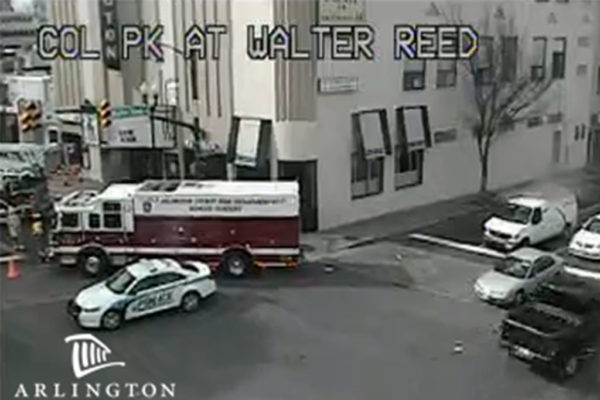 The westbound lanes of Columbia Pike are temporarily closed due to damage to the outside of the Arlington Cinema Drafthouse (2903 Columbia Pike).

On traffic cameras, the front panel of the Drafthouse’s marquee sign, which announces upcoming acts, could be seen dangling precariously in the wind. Firefighters are currently working to secure it and reopen the roadway ahead of rush hour.

While traffic is being diverted, there is another road hazard nearby. According to scanner reports, a large tree has fallen across 8th Street S. near the intersection with S. Walter Reed Drive.

#Windmageddon strikes again! Damage to the Arlington Cinema Draft House, caused lanes of the Pike to be shut down while crews cleared the hazard. All lanes of Columbia Pike are now open. pic.twitter.com/kozDkGUz1u

Update at 3:20 p.m. — All lanes of Columbia Pike have reopened. A photo of the tree down on 8th Street S. is below.