Several Arlington startups, including Clarendon-based Adlumin, attended the SXSW conference on technology, music culture and film more than a week ago in Austin, Texas.

Adlumin, a cybersecurity company that uses machine learning to track client behavior and sends alerts for suspicious activity, participated in an AED-organized panel called “War Games: From Battlefield to Ballot Box.” The discussion touched on innovations and changes in the industry.

The discussion touched on innovations and changes in the industry, including trends in how cyber attacks are being perpetrated that panelists have encountered. Adlumin’s CEO Robert Johnston was on the panel for his experience dealing with the cyber attacks in 2016 on the Democratic National Committee.

“[Rob’s] seen it go from really a complete use of malware to get into a network to now it’s really on more stealing credentials,” said Timothy Evans, co-founder and VP of business development of Adlumin. “It’s more along the lines of what nation states are doing to hack into networks. Your regular criminal hacker is acting much more like a nation state,” 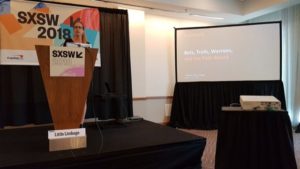 “That is a real question — I think the U.S. citizens, we’re really concerned about what we’re doing to stop interference next year or this year in 2018,” he said, adding that there were at least six questions regarding efforts to prevent Russia from meddling in the 2018 midterms.

Andrea Limbago, chief social scientist at Endgame, a different cybersecurity company for enterprises also based in Clarendon, held a talk called “Bots, Trolls, Warriors & The Path Ahead” at SXSW. She discussed the intersection of policy and innovation needed to fight the bots and trolls.

Limbago said that the audience at her talk was engaging, which is something that she doesn’t always experience at tech conferences.

“It’s great having a growing tech community in Arlington, and then representing that out here [in Austin],” Limbago said.