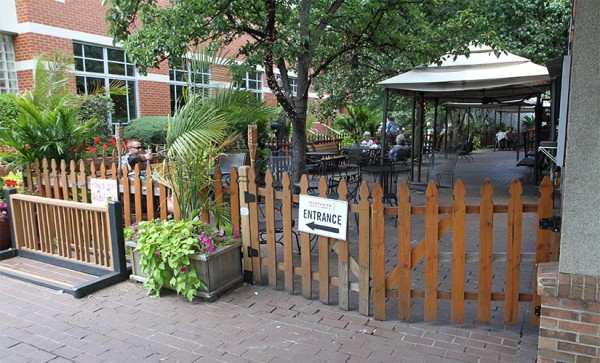 (Updated at 1:15 p.m.) The Arlington County Board approved two of the new use permit requests from Westover Market last night (March 20).

The market and beer garden sought to expand its current 29 outdoor cafe seats to 102, which was approved unanimously, but with conditions. The requested, expanded “piped-in” music hours were also approved.

“Previously, the beer garden could not play a radio, recorded, or piped-in music in the outdoor cafe area unless it was during the same hours as the live music,” noted County Board Chair Katie Cristol. “Now, they’re free to do so any evening until 10 p.m. on weeknights or 11 p.m. on weekend nights.”

The County Manager’s staff had recommended approving the expanding seating and music hours. The business withdrew a request, not supported by county staff, to expand the permitted hours of outdoor live entertainment.

The Westover Market also asked for a code modification for outdoor fireplaces, which was denied due to “life and safety concerns.” However, other forms of outdoor heating are still permitted.

An amendment was added that Westover Market would be required to have a representative on site at all times to comply with the new regulations and handle complaints. Board members said their votes were in the interest of helping a local business serve its customers.

“We’re losing the uniqueness,” lamented Board Member John Vihstadt. He said Arlington was losing its “funky” character, citing the recent closure of Clarendon’s Iota Club and Cafe and explaining his view that the most desirable neighborhoods to live in in the county are those with more unique neighborhood amenities and going-out options.

A number of beer garden customers spoke in favor of the permit changes during the public comment period. David Calhoun, the market’s bar manager, told the Board that the beer garden is trying to be a good neighbor.

“We jumped through every hoop, every hurdle that we could,” he said. “We’re not asking for too much and we’re always willing to tone it down if there is a complaint.”

Though the new use permits were approved, some Board members acknowledged and echoed the concerns of those opposed to the market’s requests.

Board Chair Katie Cristol said any enforcement of the new use permits would be difficult and would require responding police officers to have very specific zoning law knowledge, such as knowing the difference between amplified, live, or piped in music permissions.

“All of these things somehow have to find a balance,” said Board Member Christian Dorsey, explaining the difficulty in determining how to limit what he said is the only outdoor cafe with live entertainment in the county.

The market at 5863 Washington Boulevard has become an entertainment and drinking destination, popular with local residents and families, but the county has struggled with how to regulate it given little existing precedent for a business of its kind.