Opened in 2013, this Charlottesville, Virginia brewery drew upon the historic surroundings for their name and inspiration.

Their name — Three Notch’d — a peculiarly spelled moniker is derived from the old road that leads to Charlottesville. The road was made famous in 1781 by Jack Jouett, who rode it sounding the alarm that the British were advancing. 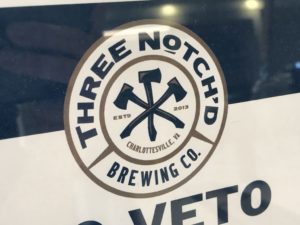 Three notches, like small slashes, mark the road. They used to also mark Three Notch’d Brewing Co., but recently they rolled out a complete rebrand. Three Notch’d ditched the slashes and historical looking fonts in favor of a clean, modern take on the historical references. They’ve also added bottles to their packaging options.

I reached out to Jack Murray, the Brand Manager at Three Notch’d to shed some light on the big changes we’re seeing. I wanted to find out more about this new design and whether they plan to phase out cans in favor of bottles. He started by explaining the new mark of three axes:

“The three crossed axes represent the tools used by Colonists to mark the original Three Notch’d Trail in Virginia.  Symbolically the tools represent three values our business strives for everyday — Radical Independence, Freedom of Expression and Civic Responsibility.  We hope our new mark grows our community and inspires them to live everyday to the fullest.”

“Three Notch’d has been continually and rapidly expanding both our product line and our distribution/locations since our launch in 2013. As is the case with many brands, as we’ve grown, our brand has evolved and over the course of the past year or so, we discussed the idea of refreshing our design elements to reflect this evolution.

“Most importantly, we wanted to tie the ‘red thread’ throughout our products and locations to create consistency for our customers, so that whether they are drinking a Minute Man, 40 Mile or new Blackberry Gose at a bar in Northern Virginia or visiting one of our locations in Richmond, C’ville, or Harrisonburg — or soon to be opened (in) Roanoke — they identify their experience as something unique to Three Notch’d. And, the timing of our rebrand nicely coincided with the opening of our new production facility and craft kitchen at IX Art Park in the heart of Charlottesville.”

Who did you work with on the redesign?

“We worked with local artists and designers on the redesign. We enlisted the original artists to re-create the illustrations on our Flagship cans to better suit the new look, and had a local designer create the system template from which to work with. Each new packaged beer is then designed to suit the product by an in-house team.”

Why add bottles to your packaging options and do you plan to keep the cans?

“Yes. We plan to keep cans! Cans are an essential part of our product mix, and the addition of bottles just gives the consumer more options on the shelf and in other retail locations. We just put out a 24 pack and 12 pack of bottles for example that feature our hop forward flagships and a rotating seasonal Declaration of Hops IPA. More variety, more opportunities to enjoy Three Notch’d.”

How has the new design been received?

“Very well! We have gotten some great feedback from our consumer base on then new branding and we look forward to continuing to refine the look and feel of the brand as we release new products.” 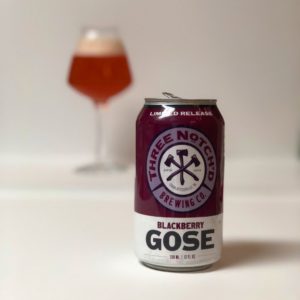 The sip cuts right to the punch. It starts out tart and fruity — think dark berries or even plums — with a salty bite then finishes light and malty. And did I mention that it’s pink!

Three Notch’d bills this as a Winter beer, but I always think of tart and refreshing beers as belonging to warmer times. No doubt that’s a limited view, and since our Winter does not appear to conceding to Spring, I can accept that this is a tasty beer for right now. For drinking indoors, with the heat on or the fireplace going when we should have the windows open. 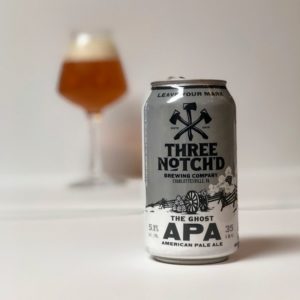 One of Three Notch’d Brewing Co.’s flagship beers, Ghost of the 43rd APA features an eerie gray cannon firing hops. The Ghost pours a lovely crisp amber and gives off an enlivening aroma of green stems and grapefruit. It’s a malt and citrusy hop balanced pale ale that has just enough lemony tartness to make it refreshing!

I often avoid pale ales, not because I have to have the strongest beer, but because pale ales have seemed left behind. A sessionable beer style that doesn’t assault the senses hasn’t been high on the list of beers sought after by many who prefer craft beer.

However, I think we’re seeing something of a renewed interest in mild beers like pale ales. Sierra Nevada is pouring more resources into it’s pale ale — the beer that defined the American Pale Ale.

Well, Three Notch’d has delivered a pale ale to make me stop and smell the hops. I’d stock my fridge with this Virginia Brewers Cup winner any day. 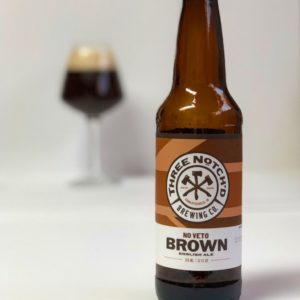 Perhaps an indicator that beer naming is tricky business in this environment of more than 5,000 breweries, but “No Veto” is a tribute to Patrick Henry. Famous for his fatalistic call to arms, “Give me liberty, or give me death,” Henry was a founding father who was active in the colonial government. One of his contributions to Virginia and the new nation was to oppose and overturn the ability of the British government to veto laws made in the colonies. Hence, No Veto.

Perhaps it’s ironic, then, that the beer that boasts this historical nugget is an English brown ale made entirely with English malt and hops. Smelling of pumpernickel, blonde roast coffee and caramel, No Veto pours a rich dark brown with a creamy head.

This is a good solid brown ale. There’s a light bitterness from the darker malt and a slight caramel sweetness — like a good cola. It has a light enough mouthfeel to keep it from feeling like a heavy beer. This may share the same style as a Newcastle, but it shouldn’t be compared to one. Three Notch’d nails the balance of caramel and coffee with the earthiness of the English hops.

Like the lighter and plainer pale ale, the simple brown ale needs some renewed love. I’m always excited when I get to try a brewery’s brown ale. I’m even more excited when they nail it. I have list of recent winners — Maui Brewing Co. and Solace Brewing Company come to mind — and now I can add Three Notch’d to it. 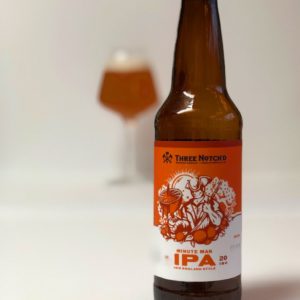 The can’s art used to evoke both Minute Maid orange juice and the historical volunteer-based militia Minutemen. Now, it’s on brand and more evocative of the orangey burst awaiting inside. Orange juice is the star here.

Pouring clear and light amber rather than hazy, I got strong orange juice concentrate with Nilla wafer and pine resin in the aroma. The sip is sweet and dank with a juicy finish.

The orange didn’t dominate the flavor like it did the aroma, but blended with the sappy resin. So many fruit-forward IPAs focus solely on citrus flavors, but I appreciate how this one had the extra dimension of pine.

Minute Man has been getting some attention in recent years. The Washington Post made it the Beer of the Week in 2016. And, before being bought by All About Beer, Draft Magazine listed Minute Man at number 10 on their list of the 50 Best IPAs in America. Put it on your list, too. It’s a delicious, juicy IPA that’s right anytime.