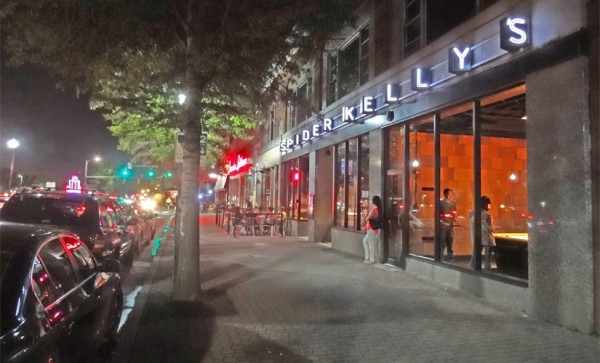 A restaurant owner has filed a lawsuit over Virginia’s happy hour advertising laws that prohibit promoting specific discounts or prices.

Geoff Tracy of Chef Geoff’s, which has a location in Tysons, filed his lawsuit in federal court in Virginia, claiming that the law is unconstitutional as it violates his First Amendment right to free speech.

More from a press release from the Pacific Legal Foundation, which has an office in Clarendon and is representing Tracy:

The law prohibits placing prices on happy hour advertising, as well as using any terminology other than “happy hour” and “drink specials.” Nor can business owners promote “two-for-one” drinks-they must be referred to as “half-priced” drinks instead.

This means ads promoting specials such as “Wine down Wednesdays” and “$5 Margaritas” are perfectly legal at Tracy’s restaurants in Maryland and D.C. But at Chef Geoff’s Tysons Corner… the exact same ads violate state law and could lead to fines and suspension of his liquor license.

“Advertising is crucial to the restaurant business, especially in Metro D.C. where happy hours are popular and competition among eateries is fierce,” Tracy said. “But Virginia would rather punish me than encourage economic prosperity.”

Mark Handwerger, who owns Clarendon’s The Board Room, “knew that Virginia has a whole mess of strange rules and laws” but said this specific law doesn’t make sense.

“My whole reaction to this is: why?” Handwerger said of the law. “What’s the point? Gas stations are allowed to put up their prices, so why can’t bars?”

The law isn’t just illogical for businesses, but for customers as well, according to some local bar owners.

“It’s always been the most confusing thing for customers,” said Tony Wagner, owner of Columbia Pike’s BrickHaus “Unless they call, or they’re on site, they have absolutely no idea what the specials are.”

Wagner, is in favor of amending the law, because even though “the law itself is clear but very restrictive… in such a competitive environment like Arlington, how do you stand out if you can’t stand out?”

Scott Parker, co-owner of multiple Arlington establishments like A-Town Bar & Grill and Don Tito’s, says the law puts Virginia bars, particularly those closer to competitors in D.C. and Maryland, at a disadvantage.

“Consumers these days are used to fast information,” he said. “So when they can’t get what they want from Arlington, but across the water in D.C. and they can see exactly what they are going to be getting, it’s hard to compete with that.”

Curt Large of Rosslyn’s Continental Beer Garden said he’s “100% behind Geoff Tracy’s lawsuit,” adding that “it’s absurd, confusing, and an embarrassment to Virginia that it has such a law and vigorously enforces it.”

“The restriction treats the citizens of Virginia like children,” he added.

A web page for the Dept. of Alcoholic Beverage Control (Virginia ABC) notes that “it can seem confusing” and that “you’re not alone” if “you have questions about what you can and can’t do related to happy hour.”

At least one bar owner in Arlington, however, did not believe that a lawsuit is necessary.

“It’s an outdated law but you move on and find different things to focus on when advertising,” wrote Ramesh Chopra, owner of Ballston’s First Down Sports Bar & Grill.

“You can’t get hung up on this law or that law,” Chopra said. “Your sole concentration shouldn’t be happy hour to get people in the door.”