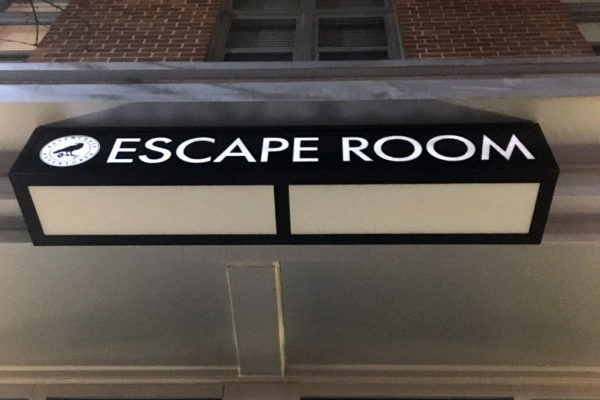 Signs are up for the business, which is located in the same building as William Jeffrey’s Tavern, near the corner of Columbia Pike and N. Adams Street.

Ravenchase — which describes itself as offering “elegant adventures for the spirited intellectual” — has existing escape rooms in Richmond and Herndon.

As defined by Wikipedia, an escape room is “a physical adventure game in which players solve a series of puzzles and riddles using clues, hints and strategy to complete the objectives at hand.”

The Arlington location is listed on the company’s website as “coming soon,” while the last Facebook post for the business said it would be opening in December 2017. A company rep emailed ARLnow.com after publication of this article to say that they were now hoping for a “late spring” opening.

“We are very heavy into the building process but it’s taken some more time that we had hoped,” said Omer Aru. “Once open, it will be a very stylish 4,000 square foot facility with four unique escape room games. We will be launching with at least two rooms: Glitch in the Matrix and MindTrap. We have two other that will follow very shortly after: Grandma’s Attic (What’s in the Attic), and Portal.”