A couple of weeks ago we looked at the significance of the complete blood cell count. This week, we’ll be looking at the serum chemistry profile which has loads of useful information about metabolic function: 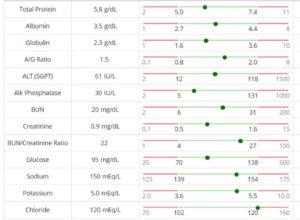 There are many other biochemical values that can also be measured from the blood, providing valuable information about heart health, pancreatic inflammation, cholesterol levels, thyroid hormones and so much more! Veterinarians today are fortunate to practice in an era when so much information is accessible in such a short period of time.