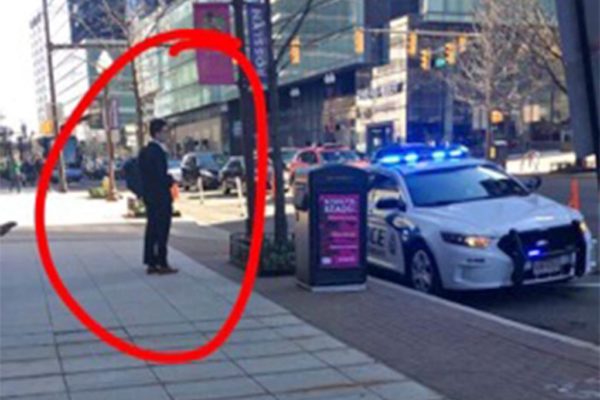 Arlington County may be known as a generally pedestrian-friendly place, but you can get ticketed for jaywalking here.

At least 18 citations were issued in 2017 for common pedestrian code violations, according to the Arlington County Police Department.

(The term jaywalking, while colloquially used to describe those crimes, is technically not an offense code in Virginia.)

“As part of a police officer’s routine duties, they enforce various traffic laws for pedestrians, bicyclists and motorists,” Savage told ARLnow.com. “Officers utilize their discretion and take enforcement action when there is a clear danger to the safety of travelers.”

At least one of these enforcement actions occurred yesterday outside of the Deloitte offices in Rosslyn (1919 N. Lynn Street), according to a tipster, who sent a photo of a man waiting near a police cruiser as an officer wrote up a citation.

Pedestrian-related citations, dependent on the exact nature of the offense, can result in fines of $66 (including processing fee).

Recent pedestrian-related fines, including fines for paying attention to a mobile device while crossing the street, have drawn attention from D.C. to Honolulu.

The annual Street Smart regional traffic safety campaign kicks off soon, running from April 16-May 13. The law enforcement effort attempts to encourage safe behavior among pedestrians, drivers, and bicyclists “through high visibility traffic enforcement and education while reducing the number of traffic related crashes and injuries.”