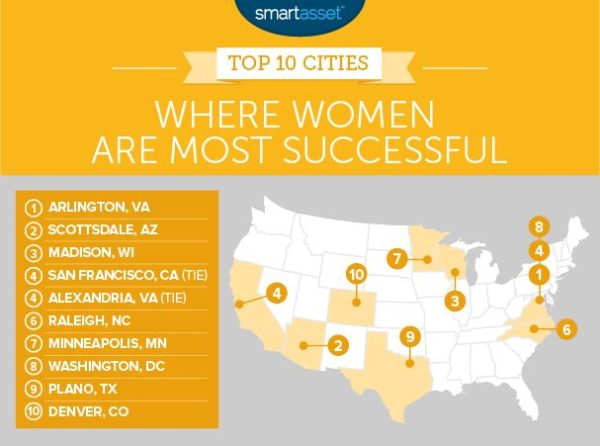 The most successful women in the U.S. live in Arlington, according to a new study by the website SmartAsset.

Here’s what SmartAsset wrote about Arlington:

Arlington, Virginia takes the top spot. This city has the highest paid women in the study, according to Census Bureau data. The median full-time working woman in Arlington earns over $80,200 per year. In total nearly 57% of women here earn at least $75,000 per year. And Arlington women do more than earn large paychecks.

For one, they also make up 38.6% of people working in their own private businesses and just under 35% of women here have a bachelor’s degree. In fact, the only metric this city does not score in the top 10 for is housing cost as a percent of income. According to our data, if the average full-time working woman paid for the average home they would spend just around 30% of their income

Arlington’s neighbors, D.C. and Alexandria, also broke into the top ten, with Alexandria in a tie with San Francisco for fourth place and D.C. ranked No. 8.

SmartAsset also recently ranked Arlington as the number one “city” for runners.