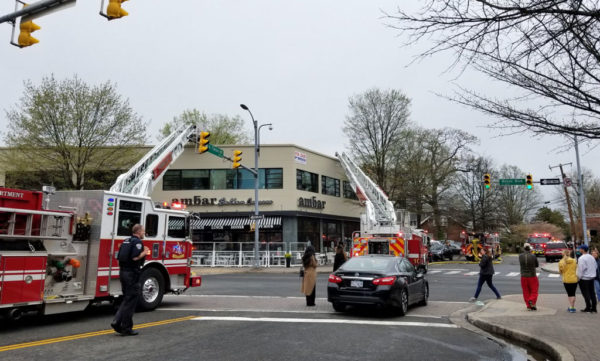 The Sunday brunch scene at Ambar in Clarendon (2901 Wilson Blvd) was a bit too hot this afternoon.

A fire broke out at the popular restaurant today around 12:30 p.m. Initial reports suggest that a rooftop air handler caught fire; smoke and flames could be seen coming from the roof.

Wilson Blvd and N. Fillmore Street were shut down during the fire department response. Firefighters extinguished the blaze just before 1 p.m.

“Minor smoke conditions” were reported inside the restaurant, which also has a basement lounge called Baba. There was no report of injuries.

In #Clarendon @ArlingtonVaFD working hard on roof of Ambar restaurant. Hope everyone is ok pic.twitter.com/T2TAqCfrLF

Update: Fire appears to be inside an air handler on the roof. Crews are attempting to get to it now. Minor smoke conditions inside the restaurant. pic.twitter.com/8ktp4FUrQU

#Update: Crews are getting water on the fire right now. Wilson Blvd at Fillmore will be shut down for a while. Avoid the area. https://t.co/SUiMmXpQAX

Couple more pics of the fire on Wilson Blvd. pic.twitter.com/mzKM1kurp7

#Final Update: Fire is out. Units are working on overhaul. Wilson and Fillmore will continue to be shut down while crews clean up. Fire Marshal will be investigating the cause. pic.twitter.com/ySUa2ZcvqG

Fire at Ambar, firefighters on the roof @clarendonnights @ARLnowDOTcom pic.twitter.com/lwotc9gi3U