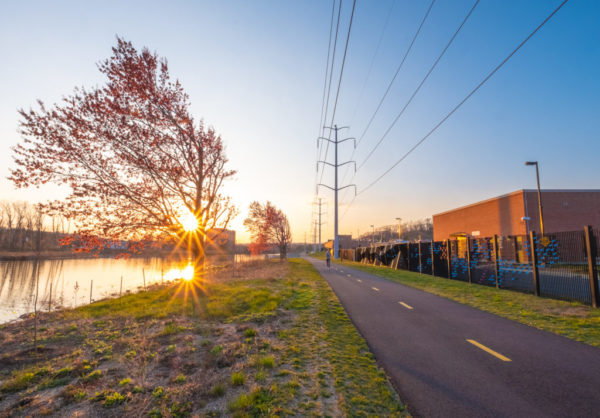 Remembering Barbara Bush — Via the Arlington GOP Twitter account: “Former First Lady Barbara Bush died today at age 92. She will always be remembered for representing the best of America. We pray for and send condolences to her family.” [Twitter, CBS News]

New Sign for Apple Store — A new sign is going up outside of the Apple Store in Clarendon. The store was renovated in 2016. [Twitter, Arlington County]

Arlington Man Facing Firearms Charges in Pa. — From a TV station near Pittsburgh: “A Virginia man is facing charges after police said he possessed 14 guns despite having a protection from abuse order against him. Perry Georgeadis, 63, of… Arlington, Virginia, is charged with 14 counts of person not to possess a firearm.” [WJAC]

Arlington’s Gain is New Jersey’s Pain — The announcement that Gerber is moving its corporate headquarters to Rosslyn, to the same building as corporate parent Nestle USA, is bad economic news for New Jersey. “This means close to 180 New Jerseyans will be out of a job. But the company promised to help employees affected, mostly in corporate positions such as marketing, finance and HR, by offering them the chance to relocate, and severance and outpatient support for those that can’t make the move.” [NJ.com]

Arlington Students Make TJ Science Cut — “Students from Arlington’s public-school system will represent about 5 percent of the incoming freshman class at Thomas Jefferson High School for Science & Technology. A total of 25 APS students have been offered admission to the regional magnet school.” [InsideNova]

Nearby: Alexandria Debates High School Lights — In a situation that may sound familiar to those in Arlington, the question of whether or not to add lights to the soon-to-be-renovated T.C. Williams High School stadium is pitting neighbors of the school against high school athletic boosters and school administrators. [Alexandria Times]