Last Friday, Dominion Wine & Beer hosted Commonwealth Brewing Company for their weekly beer tasting. The Virginia Beach brewery was in the area to promote their upcoming beer festival and to share some recent, limited releases.

Lucky customers had a chance to win two tickets to Commonwealth Brewing Company’s 3rd Annual COMMON GROUNDS Collaborative Beer Fest & Camp Night on May 19 from 4-8 p.m.! This event will feature collaborations with some of the best breweries in the country, including Aslin Beer Company and Ocelot Brewing Company. 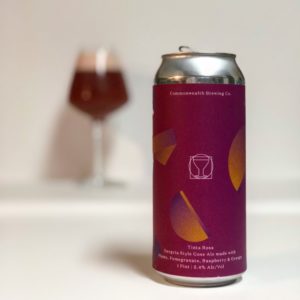 The purple coloration is the first clue that this beer might be just what they promise. While the aroma of lime and green plums doesn’t scream sangria, it does evoke a good gose.

They nailed the sangria flavor in the sip! Though it starts out extremely tart and sharply salty — as a good gose will — the orange and raspberry comes through evoking the fruited wine drink.

For fun, I’d pour several cans into a chilled pitcher with some fruit to complete the illusion. We may not be able to keep our warm days around, but Tinta Rosa was a welcomed beer on a recent warm day. Grab a four pack and hold on to it for when Spring finally returns. 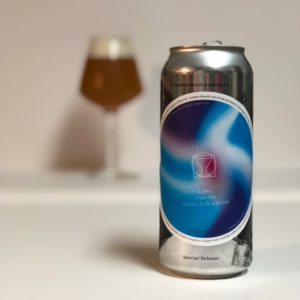 The gap that had opened up between low-alcohol sours and big beers like imperials and double and triple whatevers has been gradually filled by lagers and, once again, pale ales.

I’m not excited about all pale ales — many of them taste like watered down IPAs — but breweries seem to be getting their pale ale mojo back.

Take this beer. It’s light, fruity and hazy, like a sessionable New England IPA. The aroma of passion fruit, orange and guava with a hint of sharp herbs, delivers a sip that is slightly tart and fruity with a barely bitter finish. Lethe is, dare I say, crushable — a delicious alternative to stronger hazy IPAs. 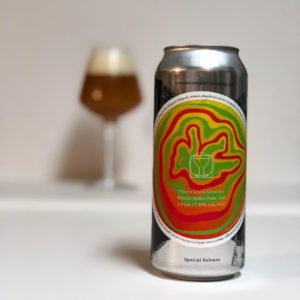 Brewed with El Dorado and experimental hops and a large amount of wheat in the grain bill, There Goes Gravity is a naturally cloudy exotic IPA. I was intrigued by the aroma that blended bubble gum with apricot and sweet honeydew melon.

The sip is sweet and smooth with a slightly bitter finish — like taking a bite of the sweet part of a honeydew along with a little bit of the rind. Sweet and slightly strong, There Goes Gravity is a sipper that can sneak up on you if you drink it too fast. Enjoy this one slowly and savor it. Besides, it won’t be around long.

Dominion Wine & Beer is having their friends from Ocelot Brewing Company over for a little party to kick off their 3rd Anniversary, which they’ll celebrate at the brewery on Saturday.

Join them Friday, April 20 from 5-7 p.m. when the brewers from Ocelot will be in the house pouring some of their newest IPAs, Gorgeous and Alone, for the first time outside the brewery. Come meet Mike and Jack and grab some beer for the weekend!

Dominion will also be giving away two tickets to Ocelot’s anniversary party on Saturday at the brewery. There may even be a surprise or two in store so keep an eye on Dominion Wine & Beer’s social media.