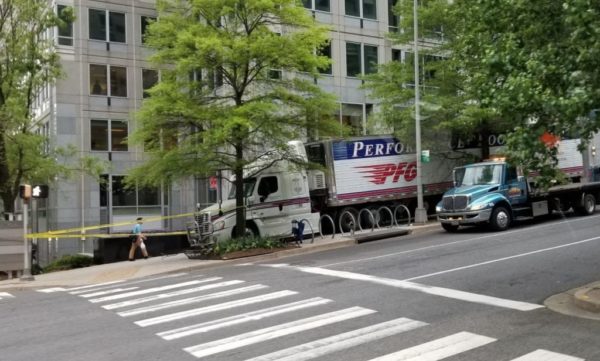 The eastbound lanes of Wilson Blvd are closed approaching central Rosslyn due to a tractor trailer accident this morning.

Earlier this morning a large truck drove onto the sidewalk in front of the Commonwealth Tower office building at 1300 Wilson Blvd. Photos show the truck in the process of being removed by heavy duty towing crews.

No injuries were reported, though authorities warned of “significant traffic delays” during the morning rush hour due to the closure. Most of the delays, according to a traffic map, are on Clarendon Blvd and side streets west of the crash scene, at the intersection of Wilson Blvd and Ft. Myer Drive.

The circumstances that led to the truck driving onto the sidewalk are unclear.

Earlier this morning units responded along with @ArlingtonVaPD for a tractor trailer accident near Ft. Myer Dr and Wilson Blvd. No injuries reported. Road closures are in place. Expect significant traffic delays in the Rosslyn area. pic.twitter.com/qev3mHZYuQ

TRAFFIC ALERT⚠️ EB Wilson Boulevard is shut down at Fort Myer Drive due to an accident. Expect delays and seek alternate routes this morning.