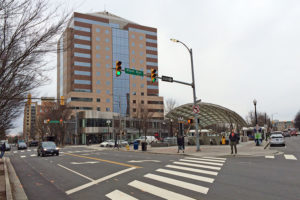 Two people are wanted by Arlington County Police after a fracas at a Clarendon restaurant early Sunday morning.

Police say the incident started after 2 a.m. when a customer “became irate over the quality of service provided by the business,” then went behind a service counter and struck an employee in the head. A second suspect struck an employee who came to the aid of the first, according to police.

Officers on the Clarendon bar detail responded on foot to the scene after observing “a large crowd and loud noise inside a business.”

The police department generally does not release the name of the business in which a crime takes place, and a police spokeswoman would only describe the business as a restaurant located on the 3100 block of Clarendon Blvd. Restaurants on that block include Mister Days, Bronx Pizza, Bar Bao and Pamplona.

ASSAULT & BATTERY (Significant), 2018-05060044, 3100 block of Clarendon Boulevard. At approximately 2:21 a.m. on May 6, officers assigned to the Clarendon Detail observed a large crowd and loud noise inside a business. Upon investigation, it was determined that a customer became irate over the quality of service provided by the business and went behind the service counter. After being escorted back to the customer area, the suspect returned to the area behind the counter and struck one employee in the head. Additional employees came to the aid of the victim, resulting in a physical altercation and a second suspect then struck an aiding employee in the neck. Warrants for Assault and Battery and Disorderly Conduct were issued for the two suspects.