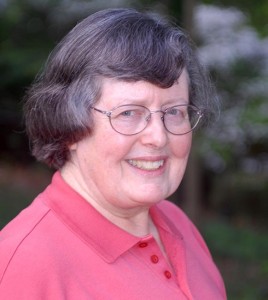 Carrie Johnson, a fixture of Arlington County civic life and a longtime Democratic activist, died at the age of 77 this past Saturday (May 5).

Johnson served for years as the keeper of voter lists at the Arlington County Democratic Committee, earning the moniker of “list lady,” and she spent nearly 20 years on the county’s Planning Commission. She passed away at the Virginia Hospital Center due to complications from lung cancer, according to her nephew, Gavin Cahill.

Friends and family members remember Johnson as an intelligent and devoted member of the Arlington community, with a quick wit and quiet confidence. She lived in Ashton Heights, where she worked as a freelance writer after a career as a legislative aide and journalist in D.C.

“Carrie was beloved and respected by several generations of Arlingtonians,” Jay Fisette, who served on the County Board for 20 years, told ARLnow. “She walked softly, yet was as large an influence on Arlington’s civic culture and success as anyone actually elected to public office.”

Cahill says Johnson was born in Milwaukee, and moved to D.C. after college to start a career in politics. She spent eight years working as a staffer for a few Republicans in Congress before joining the editorial board of The Washington Post, where she wrote articles and speeches for then-publisher Katharine Graham.

Johnson moved to Arlington in 1979, Cahill said, and quickly got involved in the county’s political scene.

“She always used to say that she became a Democrat when she moved to Arlington,” Cahill said. “And she never looked back.”

Miriam Balutis remembers meeting Johnson at some sort of Democratic function back then — she says even three decades ago, Johnson was in charge of maintaining the committee’s lists of likely voters, a responsibility she’d hold for years to come.

“She put an extraordinary amount of time and effort into compiling those voter lists, sorting them, knowing what was up to date,” Balutis said. “And we put them to good use. We used to go to the polls on Election Day and track people as they were voting. So by the end of day, we would know who we needed to call, who hasn’t come to vote yet.”

Jill Caiazzo, the chair of the county’s Democratic committee, says Johnson’s efforts went far beyond lists — she credits Johnson’s data analysis work as a driving factor behind many of the committee’s outreach efforts.

“She was never showy in any way, but she was a force behind the scenes,” Caiazzo said.

Cahill says Johnson also joined the Arlington Planning Commission in 1986, and served on it through 2005. Fisette believes she was among the longest tenured members of the commission in Arlington’s history, and he says she mentored a whole host of commissioners to follow in her footsteps.

Johnson counted her prime achievement as the creation of Long Bridge Park, which sits across from the Pentagon, transforming a handful of industrial properties into a popular community space. Cahill said she also did lots of work on planning and zoning issues in Fort Myer Heights, Virginia Square and the Four Mile Run Valley.

“She modeled, through her behavior, the civility, competence and commitment to building this community you need to be in public service,” Fisette said. “She was part of the glue here.”

Cahill says Johnson also worked as both a freelance writer and historian, with a particular soft spot for Butte, Montana. She had no formal link to the town, but fell in love with the area’s history and even bought a house in Butte so she could research its history more closely.

In all, he feels that connection to a town thousands of miles away from Arlington is indicative of his aunt’s devotion to communities of all shapes and sizes, and the people who live in them.

“She just had a habit of really falling in love with communities,” Cahill said. “It became a big part of her life’s mission.”

Johnson’s writing talents briefly extended to ARLnow. She penned the inaugural article of the Progressive Voice column in 2014.

On his blog Tuesday morning, Sun Gazette editor Scott McCaffrey recalled a recent interaction with Johnson, who remained active in Arlington affairs despite her health problems.

Last month, Johnson spoke at the public-comment period of the Arlington County Board meeting, concerned about Virginia Department of Transportation-mandated limitations being put on turning left from Arlington Boulevard onto Irving Street.

(She came armed with suggestions to improve the situation, not the counterproductive my-way-or-the-highway approach that less seasoned civic activists sometimes adopt.)

Not being aware that there was any thing amiss with her health, I followed up with her by email to tell her I’d put something together on the issue. I got a note of thanks and was playfully chided that my missive to her had used “Route 50” rather than “Arlington Boulevard.” As Carrie correctly noted, Route 50 runs from Maryland to California, but Arlington Boulevard has a much more specific connotation. Use the latter, she suggested. (I did.)

In addition to Cahill, Johnson is survived by her brother, sister-in-law, and a niece. Cahill says the family is planning a June memorial service for Johnson that will be open to the public, but has yet to nail down details.

In lieu of flowers, Cahill asked that donations be sent in Johnson’s memory to the Arlington Parks and Recreation Fund of the Arlington Community Foundation at 818 N. Quincy Street, Suite 103.

Johnson is the second major Arlington civic feature to pass away this month. Lucy Denney died on May 1, at the age of 87, after a battle with cancer.

END_OF_DOCUMENT_TOKEN_TO_BE_REPLACED

More Stories
TRAFFIC ALERT: Southbound I-395 Delays Extend to Pentagon CityLocal Reaction to Trump’s Decision to Pull Out of the Iran Nuclear Deal