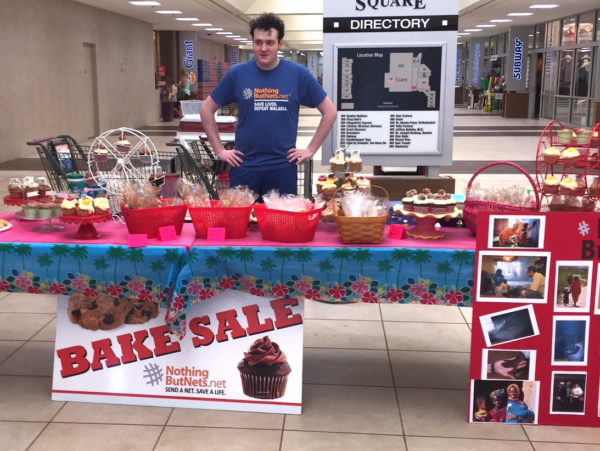 Marymount University sophomore Kevin Strickland has raised a total of $54,000 to fight malaria by holding bake sales for the past seven years.

The proceeds go to global grassroots organization Nothing But Nets, which provides insecticide-treated bed nets to families in Africa looking to protect themselves from malaria-carrying mosquitoes.

“I’m going to keep doing this for as long as malaria exists,” said Strickland. “I’m not stopping until I see it listed in the Center for Disease Control’s storage area, right next to small pox.”

Strickland, a Springfield resident, began selling baked goods for Nothing But Nets as a part of an eighth grade civics project. He first started baking in kindergarten and learned about Nothing But Nets through an ad on Hulu.

Nothing But Nets honored Strickland as one of 150 champions of the United Nations campaign in 2015. He’s currently studying public health and sociology at Marymount.

Golden State Warriors star Stephen Curry is also a proponent of Nothing But Nets and follows Strickland on Instagram. When Curry visited the White House in 2015 to discuss the organization, then-President Barack Obama reportedly asked Curry, “So where’s that kid who makes the cupcakes?”

After graduation, Strickland said he wants to open up a cupcake truck in Washington, D.C. and donate 20 percent of the proceeds to Nothing But Nets.