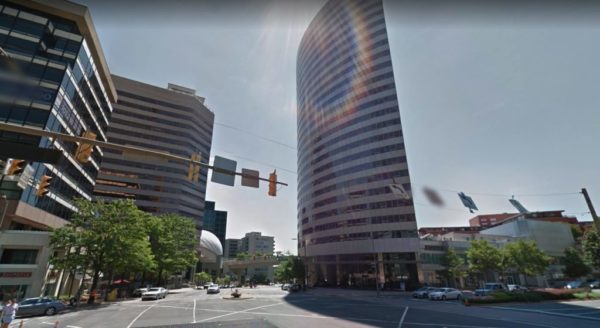 The Trabocchis will open a second location of their well-reviewed Sfoglina Pasta House at the base of the office building at 11oo Wilson Boulevard, according to a press release from building owner Monday Properties. The Washington Business Journal first reported the news.

The 4,500-square-foot location will be the Trabocchis’ first restaurant outside of D.C., and will include room for outdoor seating and even offer catering for any company looking to hold an event on the building’s rooftop.

“This is such an exciting opportunity, and we’re delighted to be a part of this vibrant and growing community, while further strengthening our love for the craft of pasta-making,” Fabio Trabocchi said in a statement.

The release did not offer any clarity on when the restaurant might open, but the Business Journal reported that it could open by the end of this year, or in early 2019. The 31-story building is currently home to Politico and local TV station WJLA, and sits adjacent to Rosslyn’s Freedom Park.

The Trabocchis opened the original Sfoglina on Connecticut Avenue in D.C. in 2016, and the couple also manages popular Italian restaurants in the city including Fiola, Fiola Mare and Del Mar.

The full press release is after the jump.

Monday Properties announced today that one of the nation’s most widely celebrated restaurateurs, chef Fabio Trabocchi, will open a second location of his award-winning pasta restaurant, Sfoglina, at 1100 Wilson Boulevard in Rosslyn, Virginia. The 4,500 square foot lease with Trabocchi includes space for outdoor seating, expanded food service and catering for the project’s expansive rooftop deck amenity.

“Monday Properties is thrilled to welcome award-winning chef Fabio Trabocchi’s Sfoglina to 1100 Wilson Boulevard,” said Tim Helmig, Managing Partner for Monday Properties. “The proven Sfoglina concept is the first of its kind to be positioned in the area and we are proud to have such a prestigious restaurant in the neighborhood that the Rosslyn community can enjoy. We now have the unique opportunity to offer world-class dining and entertainment, and tenants will also have access to the building’s state-of-the-art rooftop deck with premier catering services by Chef Trabocchi.  This is a huge milestone not only for our portfolio, but for Rosslyn as a whole.”

Sfoglina landing in Rosslyn illustrates the traction Monday Properties is capitalizing on to attract impressive businesses from a diverse group of sectors, most recently demonstrated through decisions by Nestlé USA, Gerber and Grant Thornton to move their headquarters to Rosslyn.

“We’re thrilled to be working with Monday Properties to bring Sfoglina to one of Northern Virginia’s signature addresses,” says Fabio Trabocchi.  “This is such an exciting opportunity, and we’re delighted to be a part of this vibrant and growing community, while further strengthening our love for the craft of pasta-making.”

“We’re excited to welcome a restaurateur of Chef Trabocchi’s stature to Rosslyn. Sfoglina will serve as the premier dining destination for Rosslyn’s workforce and residents who are looking to host business lunches and dinners, as well as the opportunity to enjoy drinks with clients or colleagues in an upscale environment,” said John Wharton, Senior Vice President of Leasing for Monday Properties.

1100 Wilson Boulevard is a LEED-EB Gold Certified building under the United States Green Building Council (USGBC) program. Comprising more than 5,000 square feet of indoor and outdoor space, the rooftop deck will provide tenants of the Towers unparalleled amenities for conferencing, tenant events and collaboration space. Trabocchi’s Sfoglina will provide catering service for tenants who host gatherings on the deck.

Trabocchi has renowned restaurants situated across the District of Columbia, including Del Mar at The Wharf, Fiola Mare at the Georgetown Waterfront, Fiola in Downtown Washington, Casa Luca near City Center, and the first location for Sfoglina, which is located on Connecticut Avenue. Sfoglina was awarded three stars and ranked second on The Washington Post’s 2017 Spring Dining Guide. It also earned a 2018 Michelin Bib Gourmand award. Additionally, Trabocchi has been awarded a James Beard Award for Best Chef Mid-Atlantic and Chef of the Year by the Restaurant Association of Metropolitan Washington.

Including this transaction, Monday Properties has transacted on over 600,000 square feet of leasing activity in the last 12 months as companies of all sizes relocate to Rosslyn due to its extensive amenity base, growing diversity of sectors and employees, and unmatched convenience to major transportation hubs and the nation’s capital.

END_OF_DOCUMENT_TOKEN_TO_BE_REPLACED

More Stories
The Right Note: Do We Measure Our Goals?Towing Dispute Leads to Stabbing in Crystal City