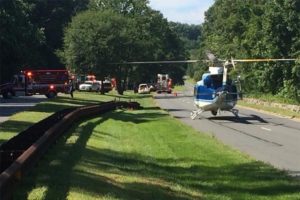 Both directions of the GW Parkway are closed between Spout Run and Route 123 due to a serious crash.

The crash happened this afternoon in the southbound lanes of the parkway in Arlington near Donaldson Run. One person is being evaluated for potentially serious injuries.

The U.S. Park Police helicopter, Eagle 1, was called in to transport the patient, prompting the closure of the entire parkway, according to scanner traffic. Arlington County medics are also on scene.