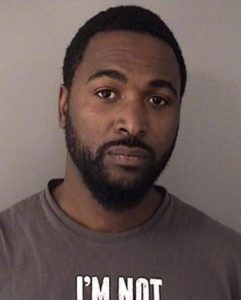 A FBI agent helped break up a scuffle last week between a tow truck driver and the owner of a car he was towing at a Crystal City gas station, according to Arlington County Police.

Police have charged 33-year-old Arlington resident Norman Mitchell Brawner, Jr. with malicious wounding in connection with the brawl last Thursday (May 10) at the Exxon station near the intersection of 23rd Street S. and Route 1. Police believe a man confronted Brawner as he began to tow his car, then a fight broke out between the pair that resulted in Brawner stabbing the man.

While Arlington police initially reported only that a federal law enforcement officer witnessed the confrontation, spokeswoman Ashley Savage now tells ARLnow that an FBI agent at the station intervened when he saw the two men start fighting.

“An FBI agent witnessed the incident and gave commands to cease the assault while displaying his firearm,” Savage wrote in an email. “The suspect left the scene and the tow company contacted police with the suspect’s location. The FBI agent remained on scene with the victim until police arrived.”

Savage says the victim was taken to a nearby hospital with “serious but non-life threatening injuries.” She would not confirm which towing company Brawner was working for, but WJLA reports that it was Advanced Towing — which has faced persistent allegations of predatory towing practices and which made national headlines in 2015 after video emerged of then-ESPN reporter Britt McHenry berating an Advanced employee.

The company’s owner, John O’Neill, did not respond to requests for comment on the incident, though signs at the Exxon alert drivers that anyone parking illegally will be towed by Advance Towing.

Brawner is set to appear in Arlington County General District Court on June 22 for a preliminary hearing.