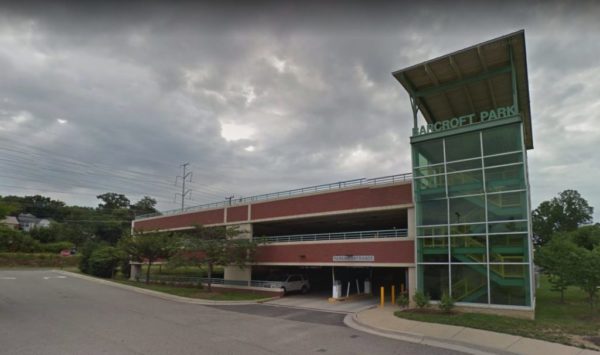 Arlington Public Schools could soon free up some space in one of its parking lots by shifting employees to a garage next to Barcroft Park.

The County Board is set to approve a deal with APS this weekend to let school bus drivers park their personal vehicles on the top floor of the Barcroft garage at 4200 S. Four Mile Run Drive.

The school system is looking to make the change because space at the Arlington County Trades Center lot in Shirlington (2770 S. Taylor Street) is rapidly becoming limited, according to a report prepared by county staff. Rising enrollment in APS has led not only to overcrowded classrooms, but a persistent push by the county to add more buses, which has squeezed its transportation facilities.

So long as the Board signs off on the deal, APS employees would be able to park in the 50 spaces on the top floor of the garage from 5 a.m. to 5 p.m. each weekday starting on July 1, and the arrangement would last for at least the next five years.

APS buses will no be moving from the Trades Center lot, so the school system also plans to run a shuttle out to the Barcroft garage, which sits roughly a mile away from the center.

County staff don’t expect this change will have any impact on demand for spaces in the garage, which also serves the Barcroft Sports and Fitness Center, as they believe the space is currently “underutilized by the public for parking for recreational activities” during the day on weekdays. The full garage will still be open to the public past 5 p.m. each day.

The Board will vote on the deal at its meeting Saturday (May 19). The matter is slated for the Board’s consent agenda, so it’s likely to pass without debate.