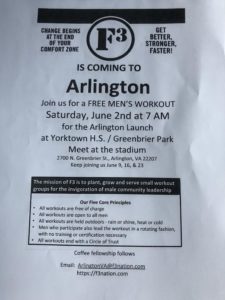 (Updated at 3:40 p.m.) A group encouraging peer-led, male-only workouts is coming to Arlington.

Jim Gregory is the organizer bringing F3, a national organization whose name stands for “fitness, fellowship and faith,” to the county.

Gregory first experienced F3 in Chapel Hill, North Carolina. Then, when he moved to Arlington, he reached out to F3 about establishing a group in his new home.

“I had a great experience down there with these guys who were fun people to hang out with and it’s a free workout and I thought you know I want to start something here,” Gregory said.

F3, which was founded in 2011, has the stated goal of encouraging male community leadership. Gregory said part of the motivation for starting a male-only workout group is that it’s an opportunity for men to find friends.

He added that it can be difficult over time for men to create meaningful bonds after they leave college, get a job or get married.

F3 has a female workout group affiliate called Females in Action (FiA), but Gregory said he doesn’t plan on being the one to organize an FiA in Arlington. Though he did say he hopes maybe the wives of F3 members will start one.

Though at least one resident contacted ARLnow.com to criticize F3’s exclusion of women, Gregory said he hasn’t personally received any criticism for bringing F3 to Arlington. He has about 25 men signed up for the first workout, which is set to take place at 7 a.m. on June 2 at Greenbrier Park, next to Yorktown High School.