Sometimes being a Revisionary Gerontologist can get me down. There are a lot of things that need to change in how we see people as they grow older and grow with dementia and how we support them. The negative, deficit-based, overly medical paradigm is so pervasive and so deep.

What to do? Sigh. I get very frustrated, and then a little despondent.

And when that happens, I watch videos of capybaras babysitting puppies (seriously, look it up). That makes me smile, and then the happy hormones sustain me.

I also happen to have a source of animal happiness living with me, and I go to him when I am in need of rejuvenation. His name is Blue. 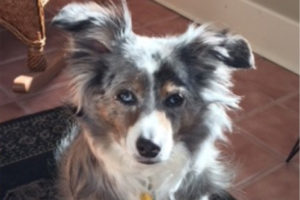 Blue is thirteen and a half, so he is an elder dog.

Blue is an Australian Shepherd, very smart, tennis-ball obsessed, beautiful, soft, afraid of large black dogs and children, very fond of loud sighs, has a great “side-eye” and is the strangest combination of serious and silly that I have ever witnessed.

And he is the best dog he has even been, because of all these things that make him who he is.

As Blue has grown older, he has taught me a lot about aging and living. Here are some of the things I have learned.

1. Blue is still him. And he is changed.

Blue will always be Blue. And each day he also evolves into something new. Both are true.

2. Focus on strengths, not just weaknesses.

I realized that, when I was talking about Blue recently, I was only talking about his “deficits” — his diabetes, his trouble moving around, his lack of hearing and vision.

But that is not all that is Blue. Blue is many other things too. And those things are pretty great.

As a puppy, Blue was very mischievous. 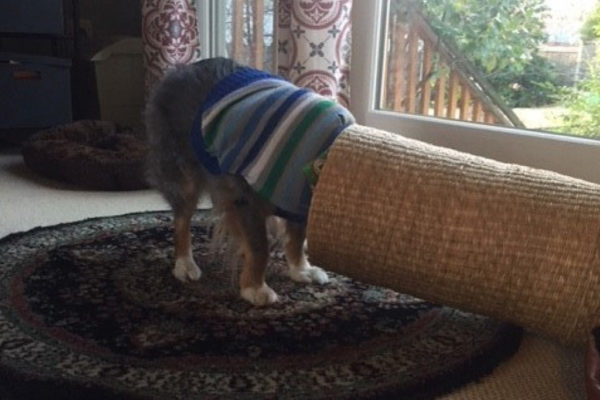 At the time, I probably did not appreciate it very much. But now, I love to watch him be curious. It is the essence of his spirit.

4. All behavior has meaning.

We hear this said about people living with dementia, in particular, but this certainly applies to each one of us.

Our actions often speak louder than words. Sometimes we need to “listen” to what someone is telling us without words.

In this picture, we were on day 10 of an RV trip, and Blue started sitting on the table in the RV. 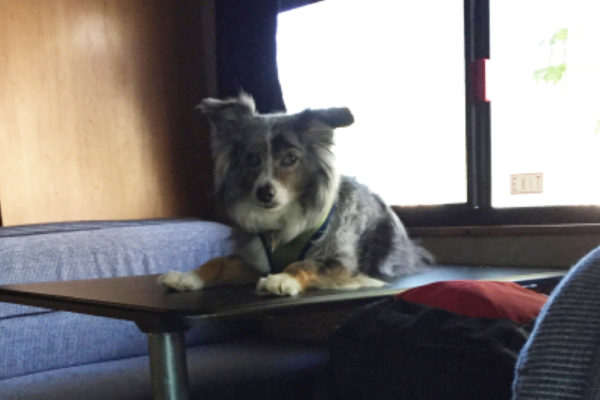 At first I thought we had entirely broken his spirit on this RV trip. But then I realized he was tired of being on the floor, where he could not see anything from the confines of the RV. He wanted to see what was out there. So he took matters into his own hands.

5. There is always room for play.

As a herder, Blue always loved playing with tennis and soccer balls. 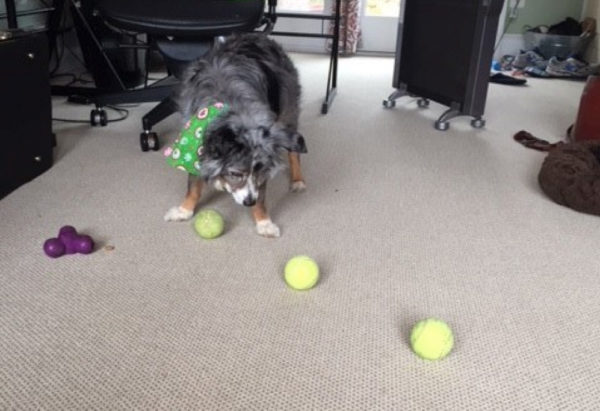 We recently learned, after him getting clocked in the head a few times, that he couldn’t see the ball very well. So now we play differently.

He still brings us no fewer than 5-6 tennis balls to remind US to make room for play.

This winter we stayed at a mountain cabin. It was still chilly — the mornings were in the 30’s. But we had such a beautiful view from the deck that we would bundle up and have our coffee out there each morning. 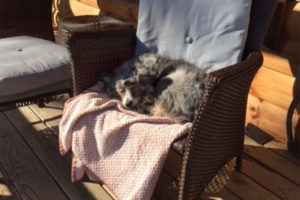 Blue joined us too.

He developed a habit in which he would go out to the deck, wait for us to place him in the chair, and snooze in the early sun for several hours.

He did not care about where we were or what we were doing.

He was unfazed by the cold.

He just wanted to be basking in the sun.

I was amazed by how peaceful he looked. The picture of contentment. And when he was done, he would bark for us to take him down from the chair and go inside. 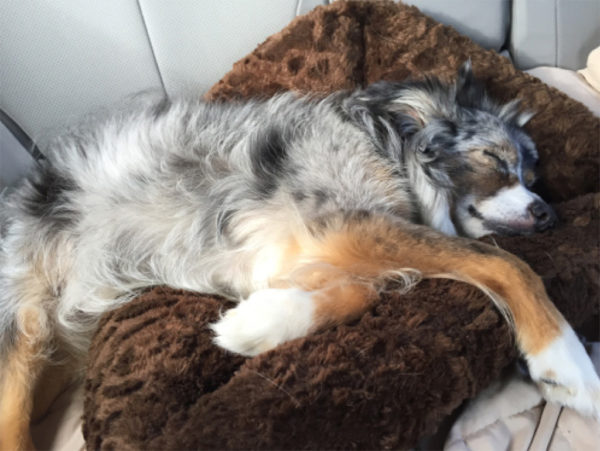 8. Interdependence is not all bad.

Blue has always been fiercely independent. I have called him a “loophole” dog because, ultimately, he finds a way to do what he wants to do.

However, he has leaned into his increased dependence on us, and waits for us to carry him up and down the stairs, or lift him onto the couch. 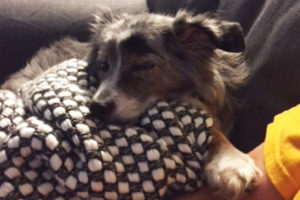 And, we so depend on him for his love. And, how he makes me laugh at least 20 times a day because he is so ridiculous. And, because he is now such a cuddle-bunny.

And, because a Revisionary Gerontologist sometimes just needs Blue the Elder Dog to help her bask in pure joy.

Maybe this brought you some joy too.