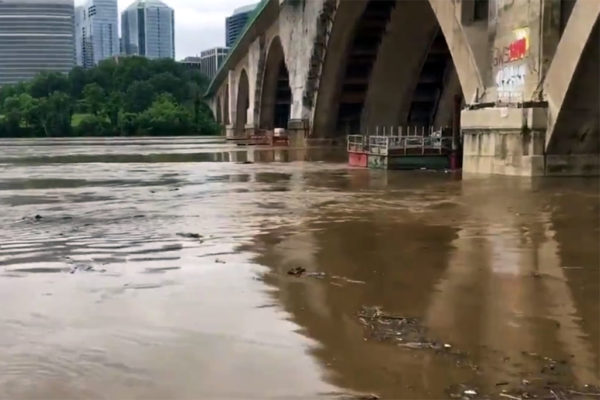 Update at 2:10 p.m. — The incident ” has transitioned from a rescue to a recovery operation,” according to D.C. Fire, indicating that officials believe the missing worker did not survive. The barge that overturned has been secured, the fire department said.

Earlier: Rescuers are searching for a worker who remains unaccounted for after a small barge overturned in the Potomac River near the Key Bridge Monday morning.

At least people were rescued after what was described as a “workboat” reportedly flipped over amid a strong current in the rain-swelled Potomac. A total of six people were in the water and five made it out uninjured, according to Twitter posts from D.C. Fire and EMS.

The Key Bridge is in the midst of a $14.5 million rehabilitation project.

#DCsBravest have secured a barge involved in this incident to the shoreline opposite the Watergate complex. The PIO remains on the scene at that location for any media needs. Also thanks to @uscoastguard and @usparkpolicepio eagle helicopter for their assistance. pic.twitter.com/gqTKDhwB4s

Update Key Bridge water rescue: 1 worker remains unaccounted for in river. Extensive search in progress utilizing 2 #DCsBravest fireboats + 2 inflatables. 5 others who were in water evaluated and Uninjured. Will not be transported. pic.twitter.com/MdDM3NPinT

Water Rescue Potomac River beneath Key Bridge. 3 people in water. 2 removed and 1 unaccounted for. This was reported as a workboat overturned.