After a long, rainy Spring we seem to be crawling into Summer. We thought it would be a good time to look at some refreshing beers to enjoy as the weather turns warmer.

These three beers have one thing in common: they’re perfect for enjoying in the heat of the afternoon on your deck or patio. Ranging from sour to slightly sweet and malty, these three beers are perfect for days with more sunlight than moonlight. Though not necessarily seasonal beers — though one is — this time of year is ideal for all three.

I recently wrote about the first beer below, but, now that it’s actually warming up, it’s worth another look. 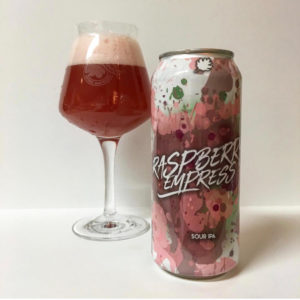 The first thing you have to do when drinking one of these is take in that guava pink color — made possible by the raspberries used in the brewing process. Then go ahead and inhale deeply — you’ll find an aroma of berries and Pinot Grigio with a distinct earthiness.

Sour IPAs can be exciting beers. For one thing, they tend to be slightly less tart than most sours. And, it’s interesting to taste how the hops interact with the sourness.

In this case, the beginning of the sip is distinctly fruity and tart. Midway, that fruit is offset by a bitter herbal flavor right before finishing with a biscuity malt. This is a tasty and flavorful sour that would be a welcomed beverage on a hot summer day. 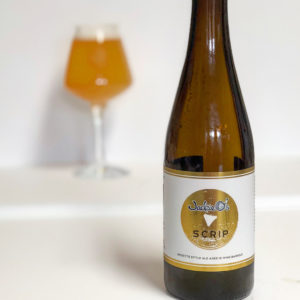 Apart from beer, the word “grisette” means “young working woman” and typically referred to women who worked in urban factories, as opposed to those who worked on farms. Think of a grisette beer as a counterpart to a saison or farmhouse beer.

These beers were brewed for industrial workers. In fact, Jackie O’s has named this beer after the factory town currency that was only good at the company store.

Scrip uses only saison and brettanomyces yeasts. It ferments for 2 months in stainless tanks and is then transferred to oak wine barrels for another 9 months.

Where the Raspberry Empress is kettle soured — made sour in the brewing process by the introduction of lactobacillus bacteria — a sour like Scrip is made using brettanomyces yeast and then aged to allow the “wild yeast” to change the beer.

This complex beer has an aroma of saltine crackers and lemon pulp with an astringent edge. The sip is light — both in mouthfeel and sourness — but flavorful.

Up front you get bitter orange and unripe pineapple with a healthy dose of earthiness, while saison yeast cuts the tartness. Enjoy this as the evening begins to cool slightly — this beer is both light and flavorful. 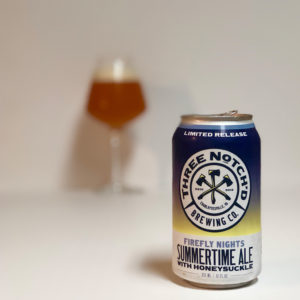 Inspired by early evening firefly hunts — a rite of childhood — the capture of strange light in hands or jars, Three Notch’d’s brewmaster, Dave Warwick attempted to capture summer in a can. Using honeysuckle, unique for having sweet, edible flowers, helps.

Unlike the multi-dimensional grisette style ale above, this beer is simple and straightforward.

And charming as a result. The aroma is all peach and honey and carnations — the floral a surprising and enticing element. Sipping reveals a light flavor of flowers, which lingers into the aftertaste, on top of peach nectar and finishes lightly sweet and malty.

Grab one of these out of the icy depths of a cooler or beer bucket, wipe it off and enjoy it as the afternoon wanes. This beer is refreshing, sure, but it’s also like Summer in a can. Now, if only it glowed in the dark.

Join Dominion Wine & Beer on Friday, June 15th, from 5:00 to 7:00 p.m. at their weekly beer tasting with Fair Winds Brewing Company in Lorton, VA. A representative from the brewery will be there pouring beers and dropping knowledge. Among other beers, Dominion will tap Dank and Stormy.