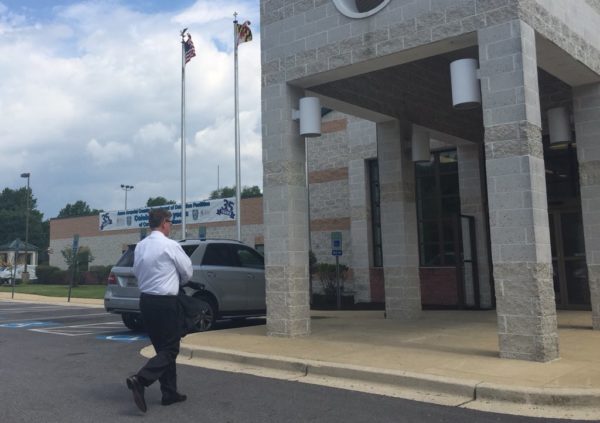 The issue of children being separated from parents seeking asylum at the U.S. border has prompted both words and actions from Arlington’s members of Congress.

Rep. Don Beyer (D-Va.) yesterday signed on as a cosponsor of the Keep Families Together Act — Democratic-backed legislation that would end the family separation policy that has sparked nationwide and even international outrage.

“Donald Trump’s family separation policy is immoral and Congress must put a stop to it,” said Beyer, in a statement. “Treating legal asylum-seekers, many of whom are fleeing violence which endangers their lives, in such a cruel manner is a violation of our country’s values and internationally-accepted agreements on human rights.”

Beyer yesterday also visited two fathers who were separated from their children at the border and being held at a detention center in Maryland. TV cameras were there as Beyer and his wife Megan described a “very emotional, very difficult” discussion with the men.

Today I visited an ICE detention facility outside Baltimore with @Call_Me_Dutch.

There we spoke for an hour with two fathers, Carlos and Mario, who had been separated from their children, a 7-year-old boy and a 5-year-old girl, for months.

What they told us was so disturbing: pic.twitter.com/MZTifSlKzc

Sens. Mark Warner and Tim Kaine (D-Va.), meanwhile, have written a letter to Homeland Security Secretary Kirstjen Nielsen, requesting an “immediate response” to a number of questions about the family separations, including:

Today I'm recalling four Virginia National Guard soldiers and one helicopter from Arizona. Virginia will not devote any resource to border enforcement actions that support the inhumane policy of separating children from their parents. https://t.co/AmdbE0XoFi

There’s more local fallout from the family separation issue. The Methodist church is considering expelling Attorney General Jeff Sessions as a member over his enforcement of the policy and justification of it by citing a Bible verse.

News outlets reported that Sessions is a member of the Clarendon United Methodist Church in Arlington, in addition to a Methodist church in his home state of Alabama.