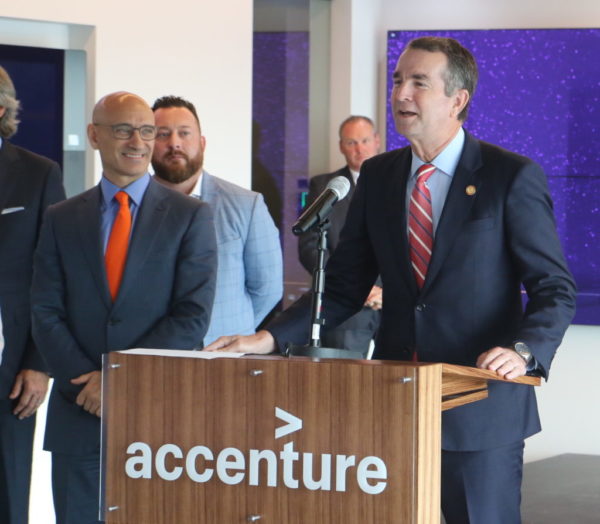 Gov. Ralph Northam (D) says he’ll renew his push for a set of Northern Virginia tax increases to fund Metro next year, a move that could help Arlington win back some critical transportation dollars.

Republicans in the General Assembly narrowly defeated Northam’s efforts to add the tax hikes to legislation providing the first source of dedicated funding for the rail service earlier this year.

The tax increases would’ve been relatively modest, bumping up levies on real estate transactions and some hotel stays, but they could’ve helped the state avoid pulling roughly $80 million in annual funding away from the Northern Virginia Transportation Authority. The group uses regional tax revenue to fund transportation improvements across Northern Virginia, and the NVTA has already had to scale back its plans to help Arlington pay for construction projects like second entrances at the Ballston and Crystal City Metro stations.

That’s why Northam says he plans to propose the tax hikes once again when lawmakers reconvene in Richmond in January, setting up another tussle over the issue several months ahead of an election where all 140 state legislators will be on the ballot.

“We’ve got to be so careful pulling resources out of the [NVTA],” Northam told ARLnow in a brief interview in Rosslyn. “It threatens other projects we were working on. It also makes Northern Virginia compete with other parts of Virginia. It was a bad idea, and that’s why I amended [the original bill]. We’re going to continue to work on that.”

There’s no guarantee that Northam’s second effort will be any more successful than his first, however. Republicans still hold a slim, 51-49 majority in the House of Delegates where GOP leaders, particularly Del. Tim Hugo (R-40th District), have pledged to beat back any tax increase to fund Metro.

But Democrats are eager to take up the fight once again, especially with other contentious issues, like Medicaid expansion or the freeze on state utility rates, off the table.

“It’s worth coming back and doing this right,” said Del. Patrick Hope (D-47th District). “The way we funded this thing was clearly shortsighted.”

Neither Hugo nor a spokesman for House Speaker Kirk Cox responded to a request for comment on Northam’s Metro plans. But Hope believes Republican lawmakers, particularly those outside of Northern Virginia, will come around on the tax hikes as they begin to feel the impacts of the funding deal’s structure.

Specifically, he points out that without seeing all the money they’d like from the NVTA, Northern Virginia localities like Arlington have already started applying for more funds from statewide entities. That will put Northern Virginia projects in competition with applications from cities and counties without the same level of traffic congestion as the D.C. region, meaning places like Arlington could end up winning out in plenty of cases.

“Everyone else is going to get less money,” Hope said. “Nobody likes to be stuck in traffic and nobody wants to get blamed for causing that.”

County Board Vice Chair Christian Dorsey points out that applications for the state’s “SmartScale” transportation funding program have already “more than doubled” this year, with counties like Arlington on the hunt for more construction dollars. He expects that will only continue as time goes on, and he was similarly pleased by Northam’s plans to bring the tax increases back.

“It wouldn’t just relieve the funding pressures on us, but everyone else,” Dorsey said. “The way Metro funding was accomplished this year ends up hurting the entire state.”

In the meantime, however, Dorsey notes that the county can’t assume that Northam’s efforts will be successful.

As the Board has started work this summer on its latest revision of Arlington’s 10-year construction spending plan, county staff have repeatedly expressed hope that the Metro funding equation changes and opens up more room for spending on big transportation projects. But without any certainty on that count, they have to prepare as if things will remain the same.

“Hopefully, this is something we can correct in two years,” Dorsey said. “But we can’t know for sure.”